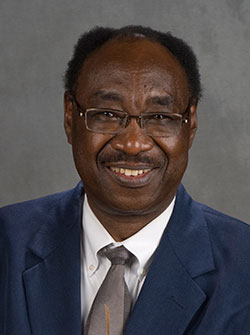 Dr. Kasambira teaches several courses, including Foundations of Education, Educational Psychology, Curriculum Development, Teaching Methods, and Multicultural Education. Dr. Kasambira has been named Professor of the Semester by Bradley students twice within the past five years. He has also taught comparative education courses in Great Britain. Apart from his professorial duties he has also served as a University administrator and senator. For the past 25 years, he has taught courses in Europe, for Bradley’s Study Abroad Programs.

During the summers of 1992 and 1997, Dr. Kasambira conducted research for some of his books at the universities of London, Nottingham, Cambridge, and Oxford in England. He has presented papers or given workshops in Ireland, England, and France, Costa Rica, Australia, Switzerland, Hawaii, the USA, Africa, Scotland, Denmark, and Austria.

Dr. Kasambira sits on a number of boards of directors, including the Heartland Salvation Army, the Saint Francis College of Nursing, the Central Illinois Youth Symphony, and the Central Illinois United Methodist Church Administrative Board. He also serves on the National Council for the Accreditation of Colleges of Teacher Education (NCATE) Board of Examiners, and frequently chairs NCATE teams.