You might not know it, but if you’re in a room with 100 people, at least 10 of them will have had a seizure of some kind in their lives. In fact, one in 26 Americans — 3.4 million — will develop the disease in their lives.

Yet even though the disease has a such a high prevalence, there are still many misconceptions. 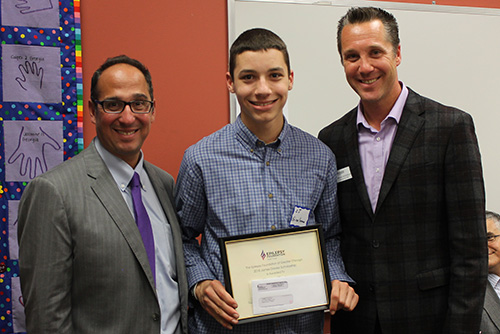 Zwirn (l) and Anderson (r) present a college scholarship to one of the foundation's clients.

“When you hear about epilepsy you think about seizures or what’s called a tonic-clonic seizure,” said Bryan Anderson ’94, CEO of the Chicagoland affiliate of the Epilepsy Foundation. “That’s the one portrayed in the media as falling down and shaking but there’s a huge spectrum of epilepsy as a whole. It can (simply) be someone who looks off in a direction for five seconds and not be present in the conversation.”

The Chicagoland affiliate provides all its services free of charge. Anderson acknowledged that not everyone who lives with the disease has a good support system and the foundation is there to fill the gap.

“If you have a child with epilepsy who is struggling in school, the foundation will help you get an individualized education plan (IEP), such as giving the student more time to take an exam,” he said. “We help set up the IEP and educate the family on what they can do, help them navigate the insurance or get them an epileptologist or neurologist who specializes in the disease.”

Closest to Anderson’s heart is the annual summer camp the affiliate runs for approximately 120 children diagnosed with epilepsy. “It’s really special to them because they get to hang out with their peers. There’s bullying that goes on for kids with epilepsy. When they’re with their peers and they have a seizure (the peers) understand what it’s like. It’s pretty powerful. You spend one day there, and you’re blown away.”

To create more awareness, an education team travels to businesses, social and religious organizations, and schools in 43 Illinois counties to talk about epilepsy and seizures and to teach people about seizure first aid.

“A lot of people don’t know what to do when someone has a seizure,” he said. “They want to call 911, but that’s not always necessary.”

Anderson and his team are also working on creating a bill for “Seizure Smart” schools. “We can make sure that all educators in the state of Illinois will have training on what to do when someone’s having a seizure,” he said. “That’s a huge priority for us in 2019 and beyond.”

Awareness is key to dispel antiquated notions, such as sticking a spoon in someone’s mouth to hold their tongue down and prevent them from swallowing it.

“You never want to put anything in anyone’s mouth,” he said. “You never want to hold somebody down; you want to turn them on their side and cushion their head. Make sure there’s nothing sharp near them because that’s very dangerous … You want to make the person as comfortable as possible.” 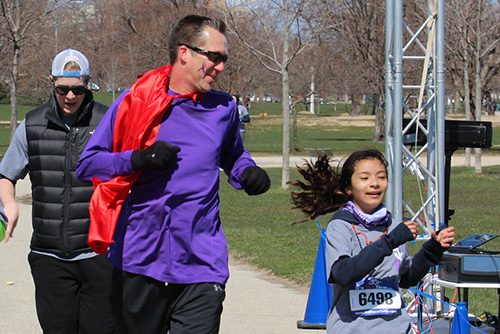 Anderson, whose career has focused on marketing and fundraising for nonprofits, joined the foundation last October. Fellow alumni are also involved: Howard Zwirn ’91 serves as board chair for the affiliate and Phil Gattone ’85 is president and CEO of the national organization. Zwirn has epilepsy but with surgery has been seizure free for 15 years, while Gattone has an adult son living with the disease.

While the camp and the affiliate’s free clinic are notable accomplishments, Anderson said he is most proud of his team.

“Some days we have hard days, some days we have easy days, but everybody really enjoys their job,” he said. “We always talk about the ‘wins’ and the positive results. (They’re) all really special moments here.”

TOP PHOTO: Kids with epilepsy get to enjoy the pleasures of the foundation's summer camp without the fear of being bullied.
Video produced by Daily Planet Productions