What happens when you come to Bradley and find out a favorite activity isn’t available on an organized scale despite facilities within walking distance of campus?

If you’re Jeremy Rapp ’21, you take matters into your own hands.

“Disc golf was something I did in high school; In the summer we’d play every day,” he said. “I thought we (Bradley) would have a team but we didn’t. So first year I started that up. It started gaining traction my sophomore year.”

Rapp knew he wanted the team to grow so he started efforts to make it an official club sport.

Working with the Student Activities Office, his application detailed the history and rules of the game, the abundance of courses in central Illinois and the 20-plus teams within 300 miles of campus.

“It’s definitely a challenge, not something you do overnight,” he said, adding that after starting with the four members and adviser necessary to be a club, the group had 22 dues-paying participants in the latest year.

“Becoming an official club sport tested my leadership and communication skills more than I was expecting. But it was also rewarding.”

After receiving university funding, the team added tournaments in Wisconsin and Missouri to its usual intrasquad events. At one time, Bradley ranked 27th nationally. Rapp said most contests are in the fall, with the spring part of the season aimed at qualifying for the national championship, which draws the top 35 teams.

This spring, because of the coronavirus pandemic, the College Disc Golf National Championship was canceled, but Bradley was able to get a spot in a virtual Putter Party. Participants competed one-on-one using different locations and point values with the highest scores advancing. Teams completed the challenge with a live Instagram or Facebook video.

Bradley beat the University of Texas in the Putter Party’s opening round and lost to Missouri University of Science and Technology in the event’s Sweet 16.

Team members have stayed active during the pandemic, playing solo rounds and sharing videos of practice or rounds. Rapp noted the sport is relatively easy to start playing.

“You don’t have to be fantastic at it, you can just keep track of your score and then next time try to get a little better.”

Teams play as a foursome, as in ball golf. Tournaments have singles and doubles formats. While only one disc is necessary to play, Rapp suggested using at least three to account for different types of shots. A series of corresponding numerical scales demonstrates a disc’s speed, glide, turn and fade capabilities.

“There’s a bunch of different combinations of these four numbers, which dictate the flight, and that dictates what type of disc would do well on certain shots,” Rapp said. “There’s more than meets the eye.”

The mechanical engineering major comes from a Bradley family, including his mother, Susan Parziale Rapp ’83 M.A. ’85, and two brothers, Kevin ’17 and Aaron ’20. He serves as an RA at Harper Hall, is a member of Lambda Chi Alpha, active with the Newman Center and an admissions STAR.

Rapp is also trying to get some high school friends to start a disc golf team at their school — rival Illinois State University.

“The joy I get … hanging out with my friends, playing a round . . . I wanted to share that with others.” 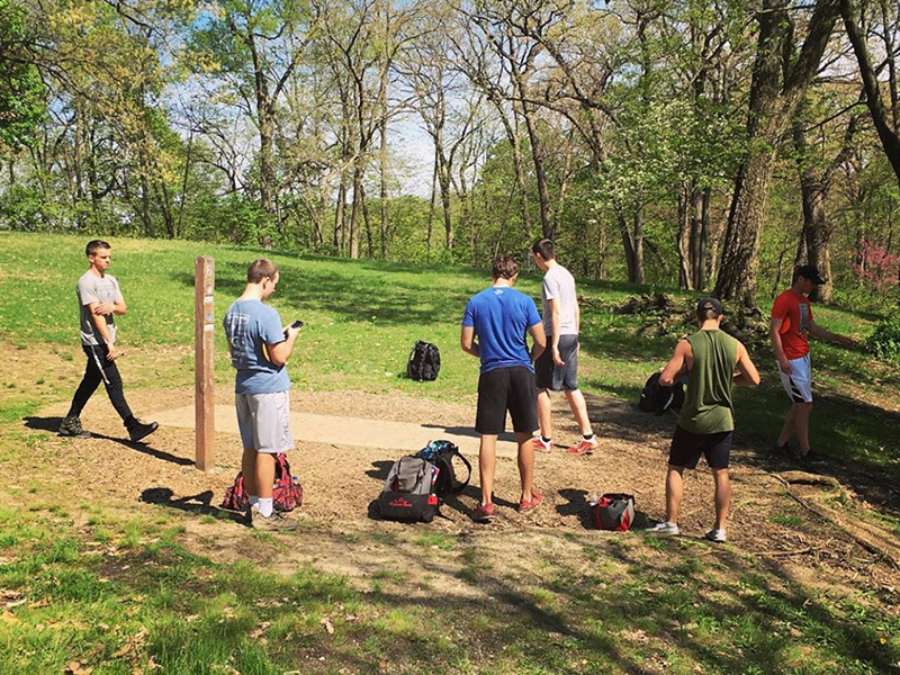 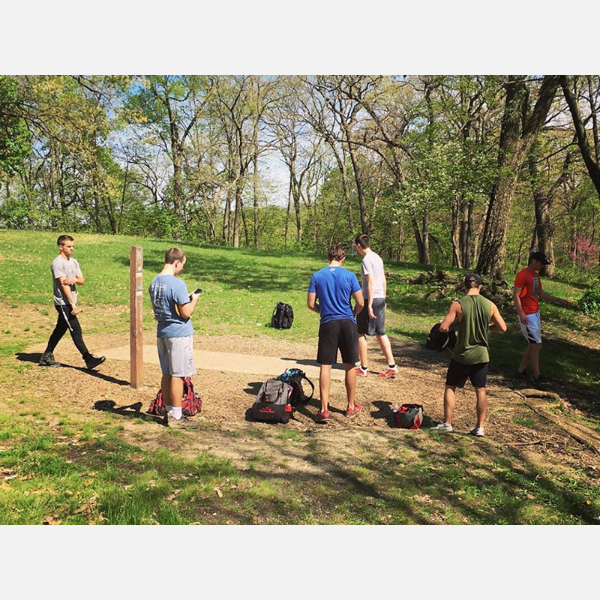 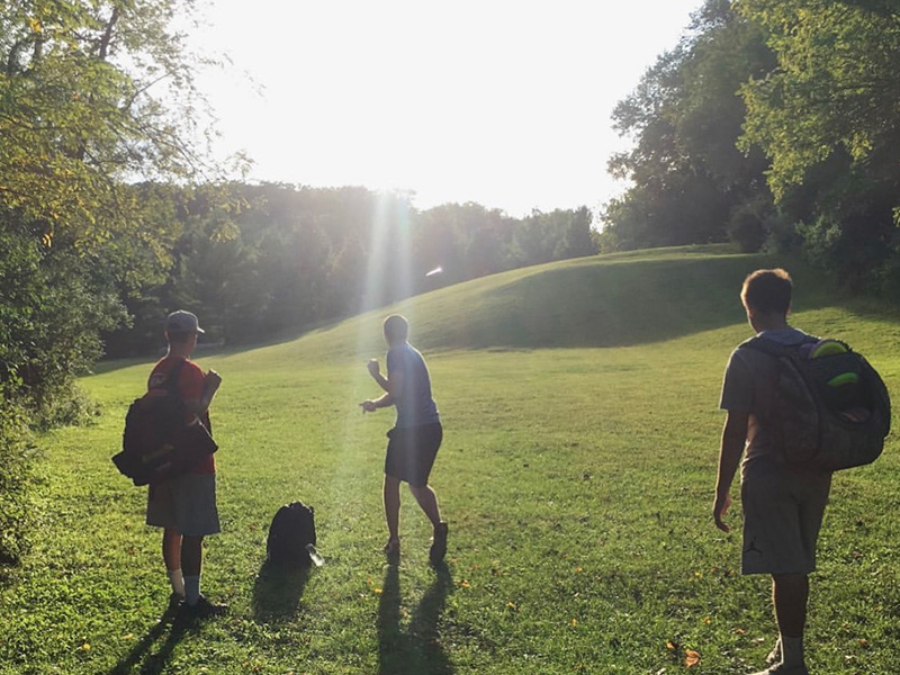 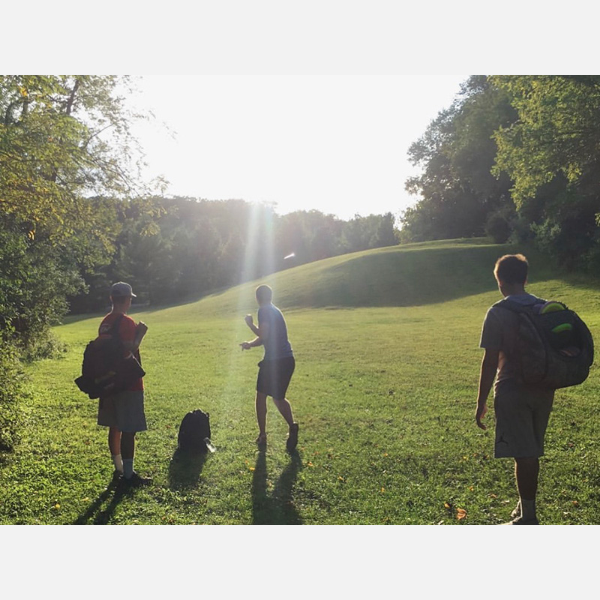 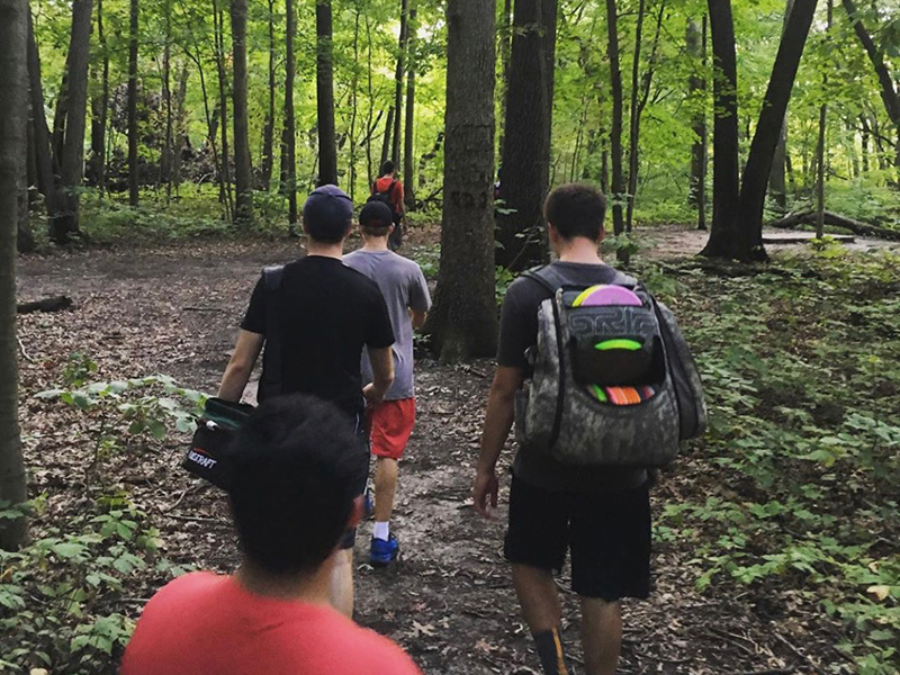 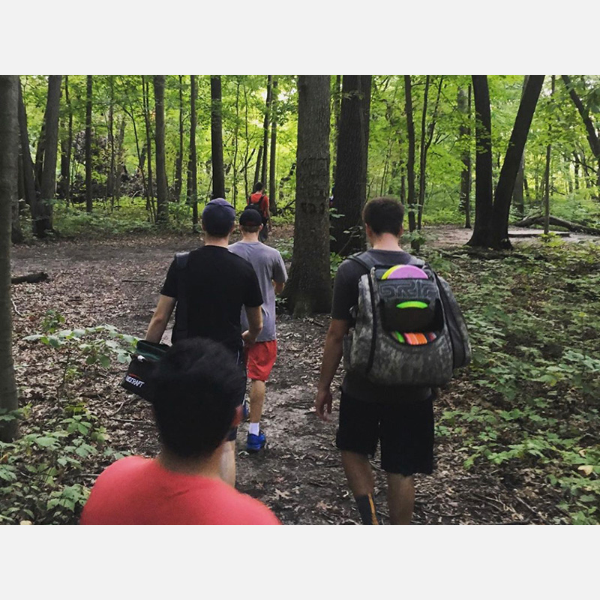