Like most children growing up in the 1980s and '90s, Michael Adams '02 was a big fan of Michael Jordan. Every time he watched a Chicago Bulls game, he would get inspired — not to become an NBA star, but to draw a different shoe design.

“I would get the paper I used for school and just use it to draw sneakers on,” Adams laughed. “One time I had enough guts to go write a letter to Nike like, 'Oh, hey, I want to be a shoe designer' ... I was probably around 14.”

Raised in the housing projects of south Peoria, Ill., Adams remembers it as a relatively conservative, family-oriented community before things turned violent. Drawing was the outlet that kept him focused and out of trouble. He won several Scholastic Art awards during his youth, but a chance encounter in high school with then-Bradley curator, John Heintzman, helped him realize that he could pursue art after graduation.

“It just opened my mind up to the possibility. Right around that time, I met my lifelong friend, Mary Ann Penn (who worked for the Peoria County Regional Office of Education). She was a mentor who influenced me to think outside of where I was brought up,” Adams said. “It was glamourized in the urban environment to be a tough guy, but it was enticing to think that one day you can be an artist and be sensitive and talk about the real beauty of things.”

The artist believes that being sensitive includes the ability to capture the moment. He builds layers on the canvas over time, using different techniques or colors. Each layer provides a snapshot of what he's thinking at that specific moment while incorporating the themes that have shaped who he is — the urban environment, spirituality, sexuality, love. He wants people to see a part of him in each of his pieces; the layers that make up his personality are like the physical layers of his art.

Adams uses his time during the pandemic to reflect on another critical layer of his life — his family. Portraiture has been a recent focus of his expression, and he is working on two large canvases to honor those who influenced who he is: one of his mother, the other of his father figure. He also shares his creativity with his two young daughters, 6-year-old Addison and nearly 2-year-old Sofia, eagerly introducing them to his world by drawing and painting together.

Adams' portfolio can be viewed on his website www.thelowid.com. Until galleries reopen and exhibitions resume, he stays busy in his home studio, adding layers and capturing this moment of time in his art.

“It’s not enough to just be a good painting, but it has to have a good story,” he said. “And I’m working on more stories.” 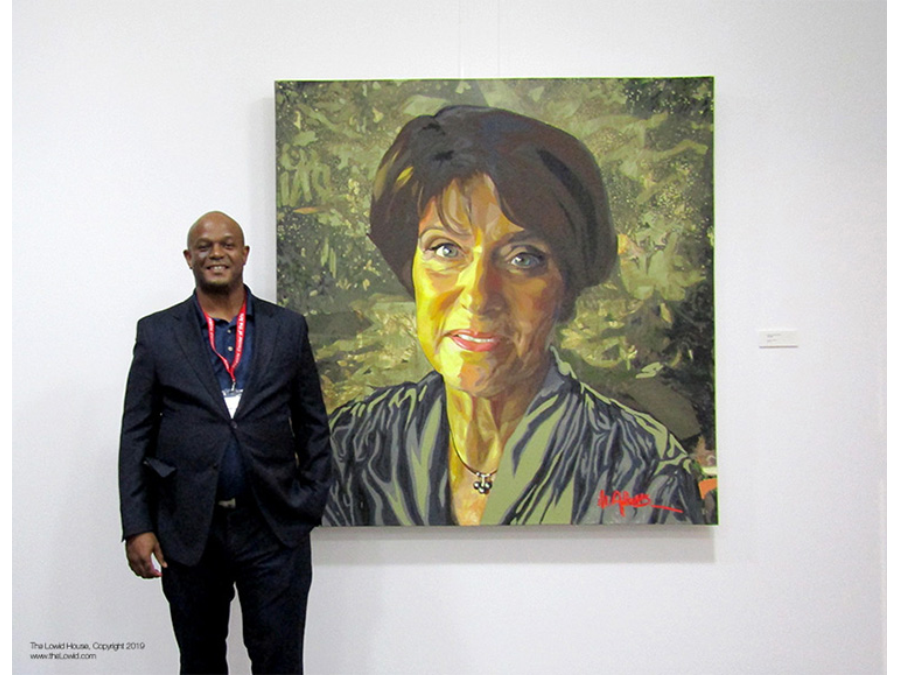 Adams poses with "Religion," his portrait of his friend and mentor, Mary Ann Penn. 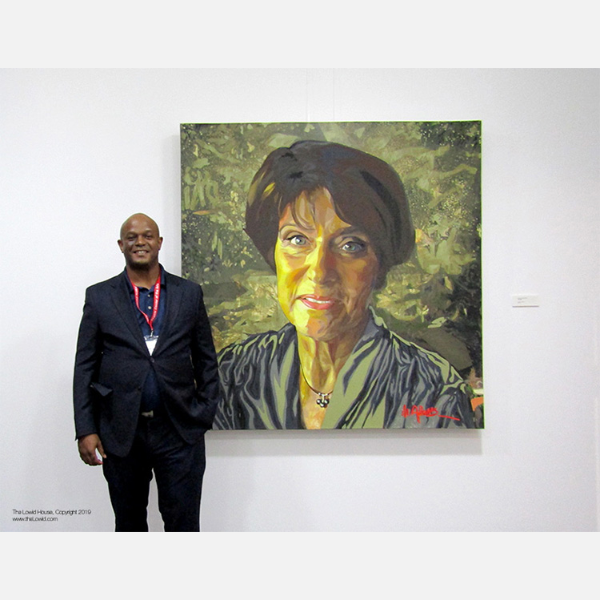