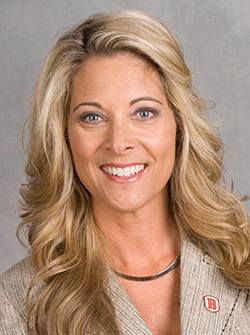 Ms. Charles received a B.S. in English/Journalism from Western Illinois University where she also studied Communications and Broadcasting. She has received numerous community awards for her communications work including "PR Professional of the Year" in 2018, “25 Women in Leadership” in 2013, “Ten Outstanding Young Professionals of Illinois” in 2012, “YWCA Julia Proctor White Arts, Communication and Media Award” in 2011 and “40 Leaders Under 40” in 2010.

She is a member of the Board of Directors of Quest Charter Academy where she also serves as a member of the Executive and Governance team, as well as committee chairperson for the Marketing and Development Committee and the annual Quest fundraising event. She is a former board member of Goodwill Industries of Central Illinois and the Peoria Symphony Orchestra Board of Directors. Ms. Charles also volunteers on numerous other community organizations and committees.

Charles was named Miss Illinois USA in 2000. Prior to Bradley, she was the Director of Public Affairs for The Heartland Partnership and spent more than a decade as a television news anchor and reporter.