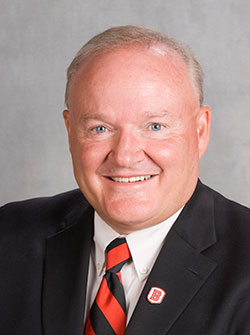 Executive Director for Institute For Principled Leadership In Public Service

Brad has been the Executive Director of the Institute since its inception in 2007. Brad has a long history of community and public service in Central Illinois and a record of bipartisan relationships with federal, state, and regional elected officials. Before joining the Bradley University team, Brad served for a decade as District Chief of Staff for former Congressman and Secretary of Transportation Ray LaHood. Brad’s collaborative leadership approach brings positive results to both statewide and regional boards he has served on including CHANGE Illinois, The Nature Conservancy, Heartland Health Services and the Build the Block referendum campaign that resulted in the magnificent Peoria Riverfront Museum.

In 2009, Brad was named to the Illinois Reform Commission tasked by Governor Quinn to clean up state government. In 2021, he received Bradley’s Mergen award for outstanding public service. He has a Juris Doctor degree from Southern Illinois University School of Law and a B.A. degree in Political Science from Illinois Wesleyan University.