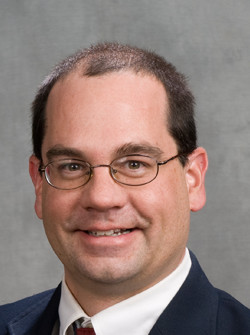 Professor and Co-Director for the Center of STEM Education

Prior to coming to Bradley, Dr. Dean Campbell graduated from the University of Wisconsin – Green Bay with a B.S. in chemistry, where he worked with Drs. Jack Norman and Nancy Sell. He spent a summer revising technical training documents at the Kewaunee Nuclear Power Plant in Kewaunee and worked in the ink and adhesives quality control lab at Moore Response Marketing Services. He then earned his M.S. and Ph.D. in chemistry at Northwestern University in Evanston, IL, working for Dr. Chad Mirkin, and enjoyed postdoctoral research at the University of Wisconsin – Madison, working for Dr. Art Ellis.

Dr. Campbell spends much of his free time with family activities. His hobbies include rock and fossil collecting and hiking and he assists in religious education at St. Anthony's Church in Bartonville, Ill.

Dr. Campbell's primary teaching areas include general, inorganic, and materials chemistry. He believes that everybody can benefit from learning chemistry. Some of his more frequently taught courses include:

Dr. Campbell’s research interests include two intertwined areas: materials chemistry and chemistry education. In materials chemistry, he is involved in the synthesis and characterization of a variety of microscale and nanoscale structures with at least one dimension less than 1000 nanometers in size. These small structures can have characteristics (e.g. optical and catalytic properties) that distinguish them from both individual molecules and extended solid structures. Nanostructures such as colloidal gold and palladium particles are synthesized by a variety of wet chemical methods, often within a polymeric support to improve their ease of use and recyclability, and then their structure and chemical reactivity are characterized by techniques such as ultraviolet/visible absorption spectroscopy, nuclear magnetic resonance spectroscopy, and electron microscopy.

Dr. Campbell has been involved with a number of committees at the departmental and college level. He works to help coordinate General Chemistry in the Mund-Lagowski Department of Chemistry and Biochemistry. He has also served as the chair of the chemistry division of the Illinois State Academy of Science and as chair of the Illinois Heartland Section of the American Chemical Society.

Dr. Campbell is the faculty advisor for the Chemistry Club (the Bradley University undergraduate chapter of the American Chemical Society). The objectives of this chapter are to afford an opportunity for undergraduate students of a chemical science to obtain experience in preparing and presenting technical material before chemical audiences, to foster a professional spirit among members, to instill a professional pride in the chemical sciences, and to foster an awareness of the responsibilities and challenges of the modern chemist. The Chem Club has hosted presentations such as the ACS Program-in-a-Box and movie nights, and has visited chemically-relevant places such as Aventine Energy, Carus Chemical, and the lab at St. Francis Hospital. The Chem Club has won numerous awards from the National ACS, including Honorable Mention, Commendable Chapter, and Outstanding Chapter.

In the Fall of 2007, Dr. Campbell and members of the Chem Club formed the Demo Crew. The purpose of this group is to educate people about science through live demonstrations. The demonstration events range from hands-on activities that the audience members can actually touch, to hands-off shows that often involve more spectacular activities. The Demo Crew has reached out to over 20,000 audience members in over 200 events in central Illinois since its formation. The Demo Crew project has involved the efforts of nearly 160 Bradley undergraduate and graduate students. This has been a fantastic opportunity to connect Bradley University and its students with the local community.