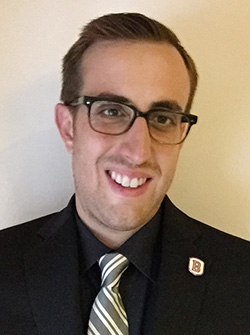 Jacob Huberman is the Executive Director of the Bradley Hollywood Semester in Los Angeles.  He serves the position with an ideal combination of professional and academic experience.   He graduated from Bradley's Department of Communication with a BA in Electronic Media (Television Arts) and an MFA in Film and Television Production from the College of Motion Picture Arts at Florida State University.

Huberman’s professional industry experience is in post-production. He has edited over 100 sports commercials, a feature documentary, and on several made-for-television movies. Additionally, he served as post-production supervisor and lead editor for the Society of Camera Operators Awards. His documentary biographies screened at Warner Bros., as well Paramount Studios.

The academic experience for Huberman includes teaching for five years in the University of La Verne (CA) Department of Communication where he taught film production and television editing.  While at La Verne, he also taught French New Wave film for the Honors Program and led students on numerous focused field trips to entertainment industry destinations around LA, and worked for the Office of Religious and Spiritual Life.

Huberman lives in Los Angeles with his wife Elena and his children, Gavriel and Rosie.