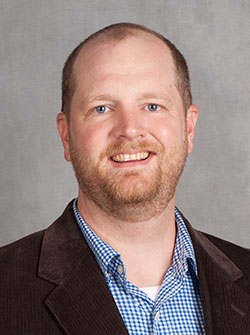 Robert Hawkins has been a member of the Bradley University Department of History since 2011. His research interests focus on the cultural and social history of the Jim Crow era United States, African-American studies, masculinity, intersections of race and gender, and sonic culture. He was the recipient of the 2011 Ralph Henry Gabriel Dissertation Prize of the American Studies Association and of the 2011 Journal of Social History Award. Prior to joining the Bradley faculty, he taught courses in American Culture and Women’s Studies at Saint Louis University and Fontbonne University. While a graduate student at the University of Mississippi, he served as a documentary fieldworker for the Strawberry Plains Oral History Project, an effort to compile an environmental and cultural history of the Strawberry Plains plantation near Holly Springs, Mississippi. He has previously worked at a wide variety of occupations, including: graduate assistant, census enumerator, bartender, delivery driver, forklift operator and warehouse worker. He enjoys spending time with his wife and sons, traveling with his family, cooking for company, and sitting on his porch listening to trains in the distance. His pronouns are he/him/his.