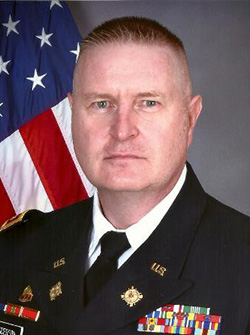 MAJ Anderson joins us as the Assistant Professor of Military Science in our College of Liberal Arts and Sciences where he instructs the Profession of Arms, Critical Thinking, Leadership and Decision Making. MAJ Anderson completed his undergraduate degree in Laboratory Science and received a Master’s of Business Administration. By profession he is a Master Logistician and has served in the military for 29 years, 15 of that in both the Army and Navy as an enlisted man.

Major Brent Anderson was commissioned as a second lieutenant March 2003 as a Direct Appointment Officer and assigned as a platoon leader in the 146th Transportation Company (Medium Truck POL). In 2003, while attending the Transportation Officer Basic Course; he was transferred to a Movement Control Team as a team leader and subsequently deployed in support of Operation Iraqi Freedom.

Major Brent Anderson currently resides in Dunlap, Illinois, with his wife Yvette and their three children.