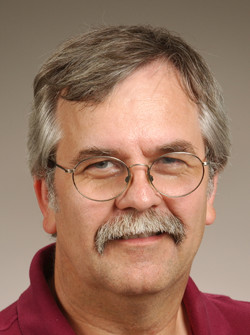 Randy Carlson, Associate Professor, has a broad background in art. He holds an M.A. in printmaking from the University of Iowa where he studied with Mauricio Lasansky and Keith Achepohl and an M.F.A. in ceramics from Bradley University, studying with James Hansen. His studies have taken him to Europe and Japan to study ceramic history, glazes, firing techniques, and the construction of wood-fired kilns. Carlson has worked extensively in three different production potteries in Minnesota, Maine and Wisconsin. His work has been exhibited regionally and nationally in both invitational and competitive formats. One of his works is represented in 500 Pitchers published by Lark Books. He has performed demonstrations in Europe and the United States. His current work is extensive and continues to reflect traditional pottery forms as well as his own uniquely "altered vessels". Since returning to Bradley as a member of the faculty in 1993, Carlson has taught all levels of undergraduate and graduate Ceramics, Two-Dimensional Design and Three-Dimensional Design for majors and non-majors, and Art Appreciation.