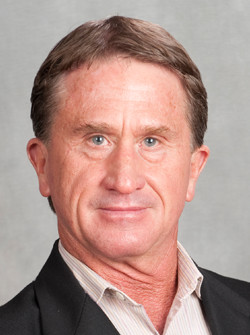 Oscar Gillespie received his M.F.A. from Arizona State University and his B.F.A. from Northern Arizona University where he received the Distinguished Alumni Award in 1997. Both degrees are in printmaking. In addition, he has done post-graduate work at Miami University of Ohio and the Banff Centre for the Arts in Alberta, Canada. Gillespie's work has been in numerous regional, national and international exhibitions. In addition, his work is represented in many public collections including: Bibliotheque Nationale de France in Paris, Nelson- Atkins Museum, the National Museum of Posnan in Poland, the Fogg Museum at Harvard, New York Public Library, Clemson University, Utah Museum of Fine Arts, and the University of Auckland in New Zealand. He directed the Bradley National Print and Drawing Exhibition from 1986 to 1991 and is the Founding Coordinator/Printer for Bradley's Cradle Oak Press facility. He is a recipient of Bradley University's Samuel Rothberg Award for Professional Excellence.