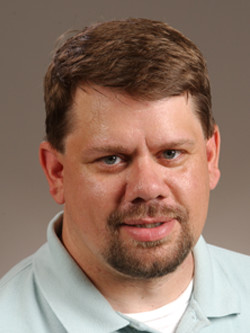 I grew up in Illinois (northwest of Chicago) and received a Bachelor of Arts degree in both biology and chemistry from Monmouth College (Monmouth, IL). I received a Ph.D. in biochemistry from Dartmouth Medical School (Hanover, NH), investigating the frequency locus of the bread mold (fungus) Neurospora crassa and the role that the large frequency gene has in circadian rhythms in this model system and also characterized the small frequency gene which appears to encode a spliced, non-coding RNA. I attended Rice University (Houston, TX) for my postdoctoral position with Dr. Janet Braam. We investigated the expression, localization and possible function of calmodulin-related genes in the model plant Arabidopsis thaliana. I taught as a sabbatical replacement faculty member for three years at Colby College (Waterville, ME) in the areas of genetics, molecular genetics, cell biology and plant development. At Colby College I began my collaboration with Dr. Frank Fekete on the identification and characterization of mercury resistant bacteria in the environment. I have been teaching at Bradley University since the fall of 2002.

My teaching interests include the first year Molecules to Cells course for biology and chemistry majors as well as health science and nursing majors. I also teach courses in genetics and plant development, both with laboratories. I have taught human genetics and bioethics courses at the graduate level. I have also taught the Biotechnology and Society (BIO 301) course for general education.

My research is in the area of molecular genetics and biochemistry. One research area involves characterization resistance mechanisms for mercury and antibiotic resistance in environmental bacteria and in the movement of resistance genes between bacteria. We have recently been investigating mechanisms of antibiotic resistance to a new drug used in aquaculture. Other experiments have involved the investigation of the transfer of resistance between potential probiotic and pathogenic bacteria, the movement of DNA out of a fish pathogenic bacteria, and the co-occurrence of mercury and antibacterial resistance genes.
I have also been investigating the expression and function of several calmodulin-related (calcium binding) proteins in the model plant system Arabidopsis thaliana. I am interested in determining the function of these proteins in plant development and responses to the environment. We are using recombinant protein generation and protein-protein interaction assays to characterize potential interactions between the calmodulin-related proteins and potential targets.

The spread of antibiotic resistance through bacteria is a growing concern in human health and agriculture.  The overuse of antibiotics, leading to growth of resistant bacteria and the release of these chemicals (or breakdown compounds) into the environment is a major concern.  An overlooked issue is the environmental pollution of heavy metals and other compounds from anthropogenic sources – for example, there are few places worldwide that are not exposed to the precipitation of mercury.  My research lab has been investigating the co-selection of mercury- and antibiotic-resistance in environmental bacteria.  Some genes encoding antibiotic resistance proteins have been demonstrated to be physically linked to the DNA conferring mercury resistance.  We have demonstrated that some bacteria from the fish GI tract are resistant to both mercury and one or more antibiotics.  We have also been investigating the mechanism of resistance to a relatively new antibiotic compound restricted in use to aquaculture and agriculture.  A number of resistance mechanisms have been identified for this antimicrobial in a short period of time since it was approved to be used.

We have also characterized the transfer of a type of antibiotic resistance from a potential probiotic fish bacteria into a known fish pathogen, which, if this occurred in a hatchery environment, would make treatment of the pathogenic bacteria and subsequent disease more difficult.  Additionally, we have begun to characterize a large plasmid from the fish pathogenic bacteria and shown that this DNA molecule is similar to other large plasmids identified in fish and human pathogenic bacteria, suggesting the direct or indirect movement of the DNA plasmid between these species, possibly through handling of the fish.

I have served on departmental committees for candidate searches and on the graduate and curriculum committees. I am currently a member of the Individualized Major Program in the College of Liberal Arts and Sciences and a member of the NCAUR Institutional Biosafety Committee.  I have been the chair of the Bjorklund Endowment Committee since 2010.  I am also on the Health Professions Advisory, Continuing Education and Graduate Executive Committees.  I also review research proposals and papers for the Tri-beta National Society (supporting undergraduate research), have reviewed DNA essays from high school students as part of the National DNA Day and have been a panelist reviewing NSF graduate student research proposals.