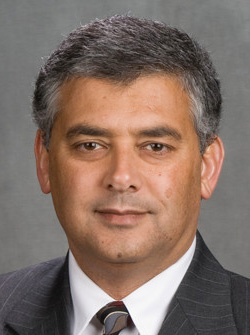 Dr. Elhouar joined the faculty of Civil Engineering and Construction at Bradley University in the Fall of 1994. He holds an M.Sc. and a Ph.D. in structural engineering from the University of Oklahoma at Norman, Oklahoma. He is interested in the design and implementation of artificial intelligence applications in structural engineering, and in the study of connection design methodologies and the analysis of the behavior of composite members. His achievements include the development of brace force prediction equations for Z-purlin supported roof systems. These equations were adopted by the American Iron and Steel Institute (AISI) and incorporated in their Cold-Formed Steel Design Specification and Manual. He also developed many expert-system and conventional computer applications, the most notable of which was the steel connection design expert system called CONXPRT, that were widely used by the steel industry.

Dr. Elhouar specializes in the analysis and design of steel structures and he has taught steel design and advanced steel design courses many times. Throughout his career, he taught courses dealing with the following subjects:

Dr. Elhouar is the recipient of the 2013 Bradley University Francis C. Mergen Award for Public Service. He has been involved in a number of service oriented activities, the most notable of which are running the CEC Bridge-Pal program, helping CEC students build playgrounds for local schools and communities, serving on the Peoria Race Relations Commission, and serving as the advisor to the BU student chapter of the Construction Honorary Society Sigma Lambda Chi.  He has also been involved in the following activities and committees at the national level: