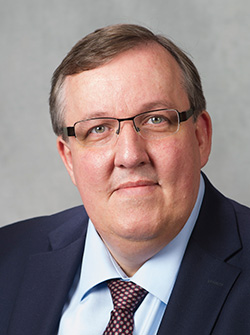 Dr. Schnupf went to trade school in Germany to become a Chemischer Technischer Assistant (wet chemist) before he received his MS (Diplom Chemiker) in Theoretical Chemistry from the University of Siegen (Germany), under the direction of Prof. Dr. Ralph Jaquet, focusing on scattering theory. After graduating from the University of Siegen he moved to Emory University in Atlanta, where he earned his PhD in physical chemistry under the guidance of Prof. Michael Heaven and Prof. Keiji Morokuma. During his graduate studies, he shifted his focus from Laser Induced Spectroscopy of open-shell systems to a more computational approach simulating the electronic structure of van der Waals open-shell systems. After his graduate studies, Dr. Schnupf spent some time as postdoc at Sandia National Labs at Livermore California studying gas phase kinetics utilizing one of the early prototype Linux clusters in the country. After his postdoc, Dr. Schnupf taught for several years at Troy University before making his first stop at Bradley University in 2003-2005 as visiting assistant professor. After his first stay at Bradley Dr. Schnupf continued his professional development working for several years as a research chemist at the USDA’s National Center for Agricultural Utilization Research (NCAUR) in Peoria, IL investigating the structural behavior of amylose/cellulosic fragments in solution using density functional theory. After his stay at the USDA he spent three years at Cornell University at the Department of Food Science working with Prof. John Brady on a multitude of projects including: the simulation of carbohydrates interacting with each other and with proteins, either as substrates for enzymes, ligands for carbohydrate-binding proteins like lectins, or in general non-specific interactions, and the hydration of planar hydrophobic species. In 2014 Dr. Schnupf returned to Bradley as lecturer in chemistry and finally joining the Department of in 2016 as a new faculty member. During his twenty plus year long career Dr. Schnupf has co-authored 40 peer reviewed articles that are published in high impact journals for the field of chemical physics, and has presented his research findings at more than twenty national and international conferences.

The research activities of the Schnupf research group are in chemical-physics, developing and utilizing cutting edge experimental (in collaboration) and computational techniques/methodologies to solve problems related to structure/function relationships of biomolecules. Specifically, we use computer simulations and formal theory to study problems in the field of carbohydrate and protein chemistry, focusing on structure/function relationships, polymer property prediction, and enzymatic biomass conversion.  Our research goals are to understand and predict how carbohydrates and other biomolecules behave in their natural environment, and how water controls their behavior. Using a range of theoretical and computational tools (e.g. molecular dynamics, density functional theory, statistical thermodynamics, and solvation theories) we can learn both how a molecule’s structure and interactions with other molecules is influenced by water structuring around them, and how local effects give rise to mesoscale structure and bulk phase behavior.

U. Schnupf, “Understanding the Energetics and Structural Features of Cellulose in Solution: A DFT and DFT-MD study of implicit and explicit solvated Cellulose Fragments”, Kyoto University, Kyoto, Japan, November 2013.

U. Schnupf, “Understanding the Energetics and Structural Features of Cellulose in Solution: A DFT and DFT-MD study of implicit and explicit solvated Cellulose Fragments”, Tokyo University, Tokyo, Japan, November 2013.

Dr. Schnupf is involved in several committees at the departmental, college and university level.