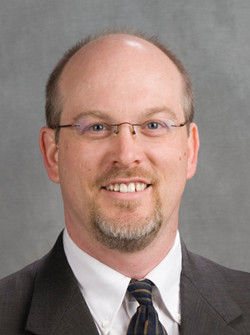 Director of Sponsored Programs and Professor, Mund Lagowski Department of Chemistry and Biochemistry

Since joining the faculty at Bradley, over 55 students (high school, undergraduate, and graduate) have worked with Dr. Andersh on various research projects. The primary theme of this work has been on the development of new synthetic methods and the utilization of these methods for the preparation of biologically active compounds (ex. pharmaceuticals).

Dr. Andersh’s research group is also working on the synthesis and testing of antimicrobial agents. Additional antibiotics must be continually developed to combat antibiotic resistance, which is a normal evolutionary response to the stress that exposure to antibiotics places on bacteria. Although considerable media attention has recently been given to this growing problem, antibiotic resistance was first observed in the 1940s. Efforts to develop new antibiotics commonly revolve around two approaches: the structural modification of existing antibiotics or the discovery of new classes of antibiotics. The focus of our research is a combination of these two approaches. They have discovered that highly substituted pyranones have antibiotic activity, and they have been able to increase the activity of these compounds by making structural changes.

Dr. Andersh served as department’s representative on the University Senate for 15 years. Currently he is chair of the Department, and he is serving on the University’s Contractual Arrangement Committee.