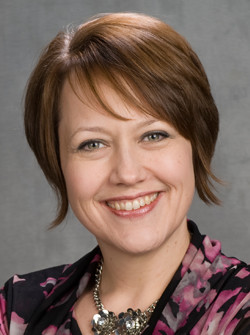 Dr. Kristi McQuade earned a B.S. in chemistry from McKendree University, which inducted her into its “Academy of Excellence” in 2011. As an undergraduate she spent two summers at the Mount Desert Island Biological Laboratory doing research on glucose transport in the red blood cells of the marine polychaete Glycera dibranchiata. She earned her Ph.D. in biochemistry at the University of Wisconsin-Madison working in the laboratory of Dr. M. Thomas Record, where she focused on the kinetics of transcription initiation by bacterial RNA polymerase. She then spent two years as a post-doctoral research associate in Dr. Pramod K. Srivastava’s lab at the University of Connecticut School of Medicine. There she explored peptide transport in the antigen presentation pathway. Prior to joining Bradley, she taught chemistry and biochemistry courses for one year at Grinnell College in Grinnell, IA.

Dr. McQuade joined the Department of Chemistry and Biochemistry at Bradley University in 2000 as an Assistant Professor and was promoted to Associate Professor in 2007. She has taken two sabbatical leaves at the USDA National Center for Agricultural Utilization Research (NCAUR) collaborating first with Dave Kendra (2007-2008) and later with Daren Brown (2016) in her project exploring stress response mechanisms in the corn rot fungus Fusarium verticillioides.

The McQuade laboratory’s main research focus is on the molecular stress responses that occur in the filamentous fungus Fusarium verticillioides. This fungus is pathogenic to corn, causing crop losses and contamination of infected grain with fumonisins, a family of mycotoxins that are harmful to humans and livestock. When fungi are exposed to biological or environmental stresses they respond in a variety of ways, including the accumulation of carbohydrates such as trehalose. The role of trehalose in F. verticillioides stress response is being explored by characterization of a series of deletion strains of the fungus lacking one or more genes coding for enzymes involved in trehalose metabolism.

Thorne, M.E.* and McQuade, K.L. (2004) Heat-induced oligomerization of gp96 occurs via a site distinct from substrate binding and is regulated by ATP. Biochemical and Biophysical Research Communications 323, 1163-1171.

Dr. McQuade serves as the academic advisor for about half the Department’s biochemistry majors each year, and was named Bradley’s Academic Advisor of the Year in 2014. She has done a variety of outreach events over the years, including hands-on chemistry activities for local Girl Scout troops. She is a strong advocate of shared governance and has been a member of a variety of committees at the university over the years, including serving as the current treasurer of Bradley’s chapter of the American Association of University Professors.