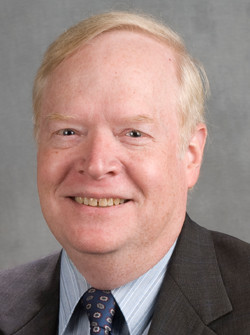 Dr. Edward Remsen graduated from Manhattan College with a B.S. in chemistry. Over the summers while an undergraduate, he did research in the analysis of ligand exchange reactions using stopped-flow kinetics with Dr. Raymond Barile. He earned his M.S. from the Polytechnic University of New York where his thesis research focused on the vibrational spectroscopy of organometallic and inorganic compounds under the guidance of Dr. John Casper. He received his Ph.D. in chemistry from Princeton University working in laboratory of Professor Thomas Spiro in the area of resonance Raman spectroscopic studies of iron-sulfur electron transport proteins and mixed valence inorganic complexes.

After receiving his doctorate, Dr. Remsen began a 26 year career in the chemical industry starting as a research chemist with the Monsanto Plastics and Resins Company in Springfield, MA. He then transferred to the world headquarters of Monsanto Company in St. Louis, MO where he worked as an analytical chemist in Monsanto Corporate Research. His area of research while with Monsanto Corporate Research was the physical and analytical chemistry of synthetic and biological macromolecules. His work was recognized with a Research Achievement Award and an appointment to Monsanto Science Fellow. He left Monsanto to take a position as a research scientist in the Department of Chemistry of Washington University in St. Louis. His research was in the physical and analytical chemistry of polymer nanoparticles in the laboratory of Professor Karen Wooley. Dr. Remsen returned to industry as a senior scientist and manager in the R&D and Quality groups of Cabot Microelectronics Corporation (Aurora, IL), a major supplier of process chemicals to the computer chip industry. While employed at Cabot Microelectronics he taught part-time as Adjunct Professor in the Department of Chemical, Physical and Biological Sciences of the Illinois Institute of Technology (IIT) in Chicago, IL. In 2009 he joined the Mund-Lagowski Department of Chemistry and Biochemistry of Bradley University as an Assistant Professor and in 2014 he was promoted to Associate Professor. In 2020 was promoted to Professor and in 2021 was appointed Caterpillar Professor. He was the 2017 recipient of Bradley University’s Samuel Rothberg Award for Professional Excellence. In 2020 he was named Fellow of the International Association of Advanced Materials and received the 2021 Chemist of the Year Award from the Illinois Heartland Section of the American Chemical Society. He has co-authored 100 peer-reviewed publications, is a co-inventor of 2 patents, and has presented his research findings at 46 national and international conferences and webinars.

Dr. Remsen's primary teaching responsibility is the Analytical Chemistry sequence. He has taught the following courses:

The research activities of the Remsen research group span a range of analytical and physical chemical areas of investigation. A critical element in Dr. Remsen’s research program is the adaptation and/or development of novel methods of analysis. An example of this approach is a form of single-molecule spectroscopy that is used extensively by his research group - fluorescence correlation spectroscopy (FCS). The FCS technique enables the quantitative analysis of single fluorophores in chemically complex solutions. Measured quantities obtained for a fluorophore using this analysis are the translational diffusion coefficient, hydrodynamic radius and solution concentration. Accurate and precise determination of these quantities allows the characterization of binding and adsorption phenomena of fluorescent probe molecules with polymers, proteins, colloids and nanoparticles. FCS studies in the Remsen group are complemented by investigations using other analytical methods including dynamic light scattering (DLS), electrophoretic light scattering (ELS), high performance liquid chromatography (HPLC), time-of-flight/mass spectrometry (TOF/MS), fluorescence emission spectrophotometry, fluorescence lifetime analysis and attenuated total reflectance/Fourier-transform infrared spectrometry (ATR/FT-IR).

A representative sampling of active research projects in the Remsen group include:

Abrasive nanoparticle slurries used in computer chip manufacturing processes are under continuous improvement in order to enable advanced processes for producing faster, more powerful microprocessors. Industrial researchers with companies both producing these slurries and using the slurries to fabricate new generations of microprocessor are collaborating with Dr. Remsen’s group. These collaborations are targeted at better understanding the key chemical interactions underlying the adsorptive behavior of abrasive slurries in chip manufacturing processes. FCS, DLS and ATR/FT-IR are the principal analytical methods used by the Remsen group in these studies.

Interactions with the research groups of Drs. Wayne Bosma and Dean Campbell provide key contributions to this research area.

Protein-protein interactions producing protein self-association, aggregation, and fibrillation are under investigation. A variety of analytical techniques are used in this research, especially FCS, fluorescence emission spectroscopy and HPLC.

SELECTED PUBLICATIONS from 2015 to 2020 (*undergraduate and **graduate student co-author):

Dr. Remsen has served on numerous committees in his department, the college, and the university. He has managed the instrument holdings in the Mund-Lagowski Department of Chemistry and Biochemistry. He has served as the Graduate Coordinator for the Department and as a member of the College of Liberal Arts and Science Strategic Planning Committee. He is a member of the University’s Student Scholarship EXPO committee, the Office of Sponsored Programs Advisory Board, and the Rothberg Award selection committee.