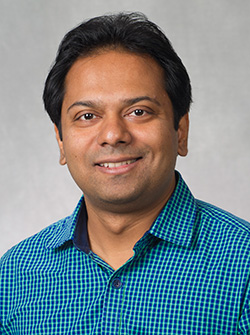 Dr. Arijit Sengupta was born and raised in the city of Kolkata (West Bengal, India). His interest in chemistry developed at an early age, and after graduating from high school he enrolled at the University of Calcutta (India) as an undergraduate student majoring in chemistry. After receiving his B.S (Honors) degree in chemistry in 2002, he joined the Department of Polymer Science and Technology (University of Calcutta) to pursue a B.Tech (Bachelor of Technology) degree. In 2005, he earned his B.Tech degree and worked in the industrial sector as a management trainee. However, his passion for polymer chemistry encouraged him to redirect the course of his career towards research. Dr. Sengupta came to the US in 2007 to pursue his PhD in the field of Polymer Chemistry at The City University of New York (College of Staten Island) under the guidance of Professor Ralf M. Peetz. His graduate research centered around the synthesis and characterization of heteroatom containing conjugated polymers. As a graduate student, he was involved in teaching undergraduate laboratory courses. After graduating with a PhD in polymer chemistry in 2012, he joined NYU Polytechnic School of Engineering (NYU Poly, New York) as a postdoctoral researcher. He spent two years at NYU Poly developing novel polymeric materials for application in plastic optical fibers under the supervision of Prof. Yoshiyuki Okamoto. His intense interest in teaching led him to pursue a teaching postdoc position at University of San Diego (California) in 2014 under the supervision of Prof. Peter M. Iovine. At University of San Diego, he actively engaged in teaching undergraduate chemistry courses and conducting research with undergraduate students in the field of starch-based amphiphilic polymers for applications in anti-fouling systems. Dr. Sengupta joined the Mund-Lagowski Department of Chemistry and Biochemistry at Bradley University in the Fall of 2016 as an Assistant Professor.

The overarching theme of Dr. Sengupta’s research involves the design and development of novel polymeric architecture or scaffolds for application in the fields of antimicrobial materials and polymer drug conjugate systems.

Antimicrobial Materials - Bacterial colonization, also known as biofilm formation is a primary concern that needs to be addressed during the development medical devices such as catheters, ventilators, implants. These devices are vulnerable to biofilm formation when delivered to patients. Formation of such biofilms leads to serious inflammation or infection followed by immediate removal of these devices through painful procedures. The use of antibiotics has been found to be ineffective as these biofilms are quite resistant. Intensive research on the development of natural or synthetic polymeric materials for application in medical devices have been pursued for improving resistance to biofilm formation by destruction of cell membranes of these small microbes. Along these lines, synthetic polymers, for example, quaternary ammonium-based polymeric materials have been successfully used as promising candidates with desirable antimicrobial activity. Such materials are broadly classified as two-component systems consisting of a hydrophobic polymeric backbone and a covalently bonded biocidal unit (generally cationic). The therapeutic unit is the biocidal moiety in these polymers, which plays a major role in breaching the cell membrane of bacteria followed by damage and subsequent death of the bacterial cell. The hydrophobic component of the polymer improves bacterial adhesion. This mechanism of action is often termed as “contact inhibition”. However, the use of cationic polymers also pose serious threats not only to natural and/or aquatic environment but also to normal human cells because of cytotoxic effects arising from their ionic component. The use of neutral polymers for this purpose is limited because of lack of neutral biocidal functional moieties. By using modular synthetic strategies, Dr. Sengupta will develop polymeric materials functionalized with active neutral biocidal sites. He will also investigate the properties of these materials in terms of their resistance to bacterial growth or biofilm formation and cytotoxicity to normal cells.

Polymer Drug Conjugates - Intensive research on the development of brush co-polymeric scaffolds for application in polymer drug conjugates (PDC) have been pursued for improving drug bioavailability, half-life etc. Such scaffolds are basically two-component systems consisting of a hydrophobic backbone and a hydrophilic graft component. The therapeutic unit is generally linked to the backbone by a labile linker. The hydrophilic component plays a vital role in the improvement of drug solubility and half-life. Along these lines, polyethylene glycol (PEG) has been successfully used as a hydrophilic component. However, the use of PEG also entails the question of biodegradability. Dr. Sengupta’s research will explore more structural diversity in this arena using biodegradable oligosaccharide grafting agents and therefore uncovering new architectures for drug delivery systems and also introduce novel duplex polymers for such applications.

Dr. Sengupta is serving as a thesis committee member for four graduate students.