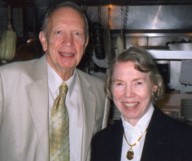 The Doris and Kenneth Kolb Chemistry Lecture has been established to bring to Bradley University notable chemists who have distinguished themselves as outstanding members of the scientific community.

Doris and Kenneth Kolb are both graduates of the University of Louisville, with Ph.D. degrees in organic chemistry from the Ohio State University. At Standard Oil (Indiana), now BP-Amoco, Ken worked in the New Chemicals Division and Doris in Information Research. She was also part of a weekly PBS television series on chemical research. In Corning, New York, Ken headed a team at Corning Glass that investigated the bonding of glass to plastics and studied various composite materials. Doris was involved in many community activities, including election to the school board. It was also in Corning that they both formally began their careers in chemical education. In a carriage house at the fledgling Corning Community College, Doris initiated the general chemistry program and Ken taught organic chemistry. In 1965, with their three sons, they came to Peoria, Ill. Ken was a professor at Bradley University, serving for two decades as chair of the chemistry department. In 1991 Bradley recognized his accomplishments with the Samuel Rothberg Award for Professional Excellence. In 1967, Doris became one of the original members of the faculty at Illinois Central College. She received the college’s first award for teaching excellence as well as several national awards. In 2004 they were honored by the American Chemical Society, receiving the first Illinois Heartland Local Section Lifetime Achievement Award and the Division of Chemical Education’s Outstanding Service Award. Doris, who was also the co-author of a popular chemistry text, “Chemistry for Changing Times,” died in December 2005. Ken continued to teach a course on petrochemicals at Bradley University and to deliver invited lectures on "The Many Facets of Glass" for almost 20 years after he retired.

Previous Lecturers in the Series

Texas A&M University
How to Win a Nobel Price: A Personal Case History

The Pennsylvania State University
The Unfolding of Carbene Chemistry

The University of Texas
Things Your Chemistry Teachers Never Told You

Northwestern University
Unraveling the Past through Chemistry

Cornell University
Chemistry’s Essential Tension: The Same and Not the Same

Simmons College
Life in the Greenhouse

Purdue University
Problem Solving: The Difference Between What We Do and What We Tell People to Do