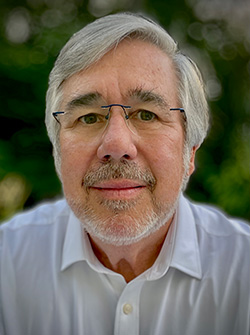 Bob Ley, an original ESPN anchor who began in Bristol on the network’s third day of operation, is the Founder of the Seton Hall University Center for Sports Media. His current role follows his 40 year career at ESPN, beginning September 9, 1979, through June, 2019, when he retired as the network’s longest-serving commentator.
Ley hosted ESPN’s acclaimed Outside the Lines program from its inception in May, 1990 through his retirement. “OTL” began as a periodic primetime special and evolved into a daily program examining stories and issues off the playing field.
He was an original anchor of SportsCenter, from its humble beginnings to its growth through the decades into an American cultural staple.
Ley followed his avid interest in soccer into reporting, announcing and hosting seven FIFA World Cup championships (five for men, two for women) and several European Championships. These assignments took him to locales as diverse as South Africa, Brazil, Cyprus and venues across Europe. For his work on soccer, Ley received the Honorary All-America Award by the National Soccer Coaches Association of America for his contributions to the sport in January 1999.
He has reported for “Outside the Lines” from Vietnam (on athletic shoe company labor practices) and Russia (post-USSR sports issues, in 1996).
In his roles with SportsCenter and Outside the Lines, Ley was honored with 11 Sports Emmy Awards, capped by the 2018 statue as the Outstanding Sports Personality – Studio Host. With Ley as host, Outside the Lines also received three CableACE Awards as cable’s top Sports Information Series.
Ley also hosted ESPN’s NFL Draft coverage (1980-89) and the NCAA basketball tournament studio show (1980-89) which perfected the "whip-around" format that elevated the tournament to a social phenomenon. He has also covered several NCAA basketball Final Fours, hosted live special events for ESPN, and done play-by-play commentary for college basketball, boxing, and CBA basketball.
Over the years, Ley was identified with ESPN’s coverage of major stories, breaking news and cases where world issues overshadow the world of sports. From Magic Johnson’s AIDS announcement to leading ESPN's coverage of Pete Rose's suspension by Bart Giamatti, to anchoring breaking coverage of the 9/11 terrorist attacks, and the Boston Marathon bombing, Ley was in the anchor chair. When an earthquake struck San Francisco during the 1989 World Series, it was Ley who provided the first national news coverage live from the site (ESPN’s production facilities were not dependent on local electrical power). He has interviewed four U.S. Presidents (Ford, Clinton, G.H.W.Bush aboard Air Force One and G.W.Bush).
Ley is a 1976 magna cum laude graduate of Seton Hall University with a bachelor of arts degree in communications.