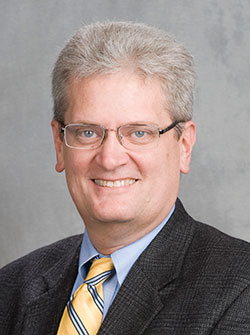 Rob Prescott is the Associate Dean of Undergraduate Studies for the College of Liberal Arts and Sciences. In that role he serves as the primary point of contact for LAS undergraduate curriculum matters, including oversight for essential matters of advising, records, grievances, and success. Dr. Prescott also provides administrative leadership and support for the Interdisciplinary Major Program, the LAS Global Scholars Program, Study Abroad, ROTC/Military Science, and the University Academic Exploration Program. In addition, he coordinates and creates off-campus internship opportunities for LAS students.

Dr. Prescott completed his undergraduate degree in Biochemistry and then went on to earn a Master’s and Ph.D. in English, with a dissertation on the influence of the physical sciences on British Romantic Poetry. Before coming to Bradley, he taught at the University of Maine at Farmington and at Lakeland College in Sheboygan, Wisconsin. His wife, Tracy, teaches in Peoria School District 150, and they have two children.

Dr. Prescott teaches Technical Writing, Western Civilization, British Literature Survey, and graduate and undergraduate courses in Romantic Literature. In the Honors Program, he has also taught seminars in Songwriting for Beginners, Opera for Opera Haters, and Literature of Skepticism and Belief.

Dr. Prescott published a book in 2010 titled, Why to Major in English if You’re NOT Going to Teach (Kendall Hunt Press). His book explains how all the various divisions of English Studies prepare students for careers in business and public service. It also shows English majors how to identify career opportunities and how to apply for jobs in those areas. The concluding chapter lists 200 very famous people, in all walks of life, who hold undergraduate degrees in English—Fortune 100 CEO’s, Nobel laureates in Medicine, five Supreme Court Justices, Hollywood actors, and many of America’s most famous journalists.

He has also published articles on British Romantic writers, and he works collaboratively with colleagues in the Foster College of Business on the subject of the relevance of communication and critical-thinking skills in the world of business.

Dr. Prescott served two three-year terms as chair of the Department of English. Before that he served as associate department chair from 1999-2008, and he was the M.A. program coordinator from 1996-2008. From 2000-2006 he was the coordinator of the BU Writing Center.

Off campus, he serves as Chairman of the International Council for the Nazareth Academic Institute, in Nazareth, Israel. Since 2003, NAI has served to provide higher-education access to the Arab students of the Galilee region. What began as a branch campus of the University of Indianapolis became a free-standing private institute in 2010, and now NAI is working to become a budgeted public college in Israel.