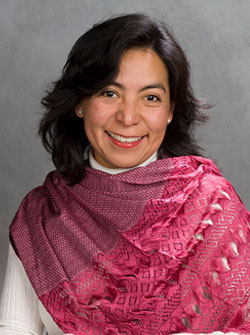 Aurea Toxqui began teaching at Bradley University in 2008 following a year as a lecturer at the University of Tennessee-Knoxville. She was born and raised in Mexico City. Before coming to the U.S. to get her Ph.D., she worked for several museums in Mexico, including the National Museum of History. There, she was the head researcher for the museographical renovation, as well as the head of the Education Services Department. While pursuing her Ph.D., she discovered her calling as a college professor. She enjoys outdoor activities such as kayaking, disc golf, and hiking – particularly in the snow – all of which she has discovered in Peoria. She also takes pleasure in swimming, dancing, traveling, cooking, and spending time with family and friends.