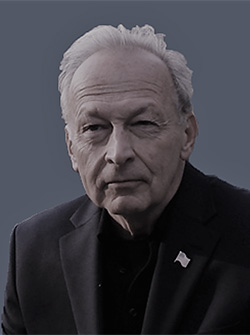 William Toel has a unique union of military, international business, banking and academic experience in consistently outstanding organizations.  He is recognized as a man of mature international perspective.   In 2000 he was runner-up for the United States Senate in Arizona.

Of his academic experience, he has been invited to teach at the University of Illinois (Champaign-Urbana), the University of Virginia, the American Graduate School of International Management (Thunderbird), Arizona State University and Bradley University.  He has also given lectures at universities throughout Germany.   He has won excellent and outstanding teaching honors, to include the Chair’s Award for Teaching Excellence in Fall 2011.  His courses are in the international fields of business, marketing, economics and finance.  He has taught in undergraduate and MBA programs, as well as the Honors Programs at the University of Illinois and Bradley.

Mr. Toel has held president and chief executive officer appointments and served as a board member at various banking organizations.

In the international business realm, he served with a major and highly respected firm with operations in 45 countries, CPC International.  He also served as the youngest president of what was then the nation’s second largest cash-grain exchange, the Peoria Board of Trade, successfully leading a diverse council represented by major international firms.  He has assisted numerous corporations as a consultant.

In the military, William Toel was one of the youngest captain and company commanders serving in the Army in the Far East during the Vietnam conflict.

Between 2008 and 2012 Mr. Toel conducted surveys, extensive interviews, and led a research team examining the German social, economic and political model.  He was invited to attend the Harvard conference on the “Angst of German Leadership” in February, 2012, and was a guest lecturer in 2014 at Freie University in Berlin.

Mr. Toel approaches teaching by encouraging in his students a lifetime of intellectual curiosity.