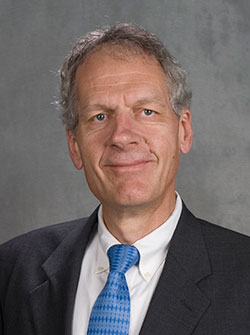 Professor Bukowski teaches the Institute’s senior thesis course as well as its sophomore-level course on qualitative research in international studies. He also regularly offers classes on the role of intelligence in world affairs, international negotiation and diplomacy, Latin America, and Eastern Europe. He has taught courses in Bradley’s Honors Program on international political economy and on the disintegration of Yugoslavia, and he has participated in the University’s Western Civilization program and the Graduate School’s program in Liberal Studies. He has also taught classes in Russia, Malta, and Spain through Bradley’s Study Abroad program.

Dr. Bukowski’s research has addressed the problems of post-socialist states, particularly the process of transitioning from an authoritarian political system to a democratic one. His scholarship also is concerned with the challenges faced by small state actors in the international system. Much of his research has focused on the experiences of Slovenia since its secession from the former Yugoslavia. His recent publications include: “Assessing Slovenia’s European Union Presidency,” Slovene Studies, vol. 31, no. 2 (2009); “Slovenian Foreign Policy towards Serbia: Reclaiming the Past,” Slovene Studies, vol. 28, no. 1/2 (2006); "Ten Years of Slovenian Foreign Policy: A Small State Encounters the World" Slovene Studies, vol. 22, no. 1/2 (2000) [published June 2003]; "Testing Consolidation Theory: Understanding Slovenia's Experience," Journal of International Relations and Development, vol. 3, no. 1 (2000).  He was also co-editor and contributor to Small States in the Post-Cold War World: Slovenia and NATO Enlargement (Praeger Publishers, 2002), and The Return of the Left in Post-Communist States (Edward Elgar, 1999),

Professor Bukowski is a member of the College of Liberal Arts and Sciences Executive Committee and its Strategic Planning Committee. He chairs the Coordinating Committee for the Russian and East European Area Studies minor. He recently completed three-year terms on the Executive Council of the Society for Slovene Studies and the External Advisory Committee of the International Research and Exchanges Board. In 2008 and 2010 he served as an external advisor to the State Department in conjunction with briefings of ambassador designates to Slovenia.