But the Met stage isn’t the mezzo-soprano’s only venue. Chigas has sung a wide variety of roles all over the U.S., including the Santa Fe Opera, Boston Lyric Opera and New York City Opera. She’s performed the lead in Bizet’s “Carmen” and Dorabella in Mozart’s “Cosi Fan Tutte.” Additionally, Chigas has served as soloist for masterworks such as Verdi’s “Requiem” and Handel’s “Messiah,” among others.

“’Carmen’ was really challenging at first, but then it became a part of me,” she said. “It was fun to explore the many sides of that complex character. Each production brought out a new angle to her.” 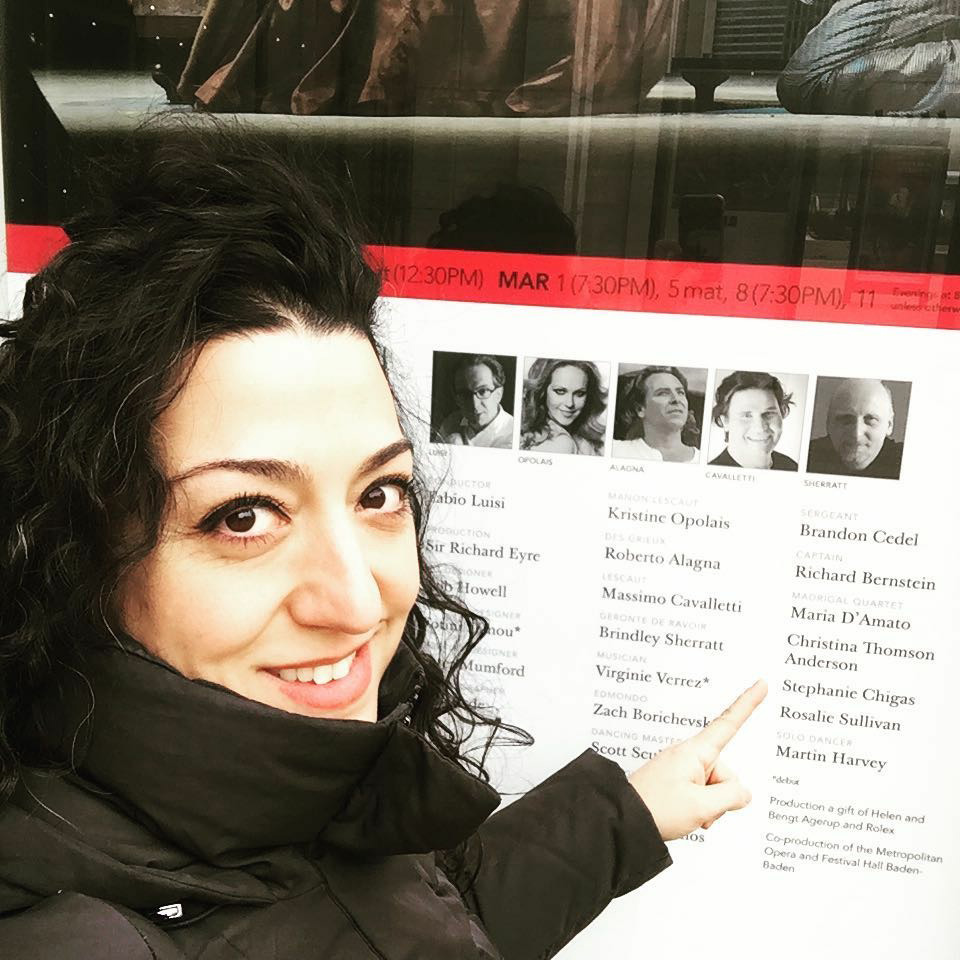 Despite the joy singing brings, Chigas admitted it’s not all glamor. The Met does about 25 productions each season and chorus members typically sing 17-18 of them. That includes nightly performances Monday through Saturday and a matinee on the weekend. There are also rehearsals during the day.

“It’s really strenuous to be singing in these long operas almost every night,” said Chigas from her home in Astoria, Queens, just outside Manhattan. “But the good thing about it is because it’s a repertory company, we do certain pieces every year or every other year so they get in your memory.”

While she’s one of the lucky ones, Chigas knows she can’t sing forever, so last April she enrolled in Bradley’s online master’s in counseling program and its clinical mental health track. The program was the perfect choice for Chigas’ empathetic nature.

“(I believe) that music has a place in this world and that it reaches people in many ways, but I felt like there was another way for me to help people. This all kind of hit me on stage one day a few years ago. Then I noticed that family and friends often tend to seek me out as a sounding board and would tell me I was very helpful to them.”

Although she wondered if she’d be able to be successful given her lack of a science knowledge, Chigas found she was able to draw on her work as an artist.

“As a musician, our listening skills are on point,” she said. “There’s so much connection with history and the stories of the operas, the communications between characters and the psychology behind their relationships. All of a sudden it made sense to me, and it felt right.”

Bradley’s online program allows Chigas to stay with the Met and be present for her 9-year-old daughter, Zoe. Returning to school later in life allows Chigas to take advantage of the time management skills she learned as a singer for this new role she considers a perfect fit.

“I think education is one of the most important things we can do for ourselves. But at 18 to leave high school and decide on a major, people can (sometimes) feel stuck. I know music was my passion ... and it was hard to start a career change, but it’s one of the best things I’ve ever done for myself.”

ABOVE: Chigas (center) in her debut solo role at the Met as Georgette in La Rondine in 2013.
Photo by Ken Howard