Setting a hall of fame example 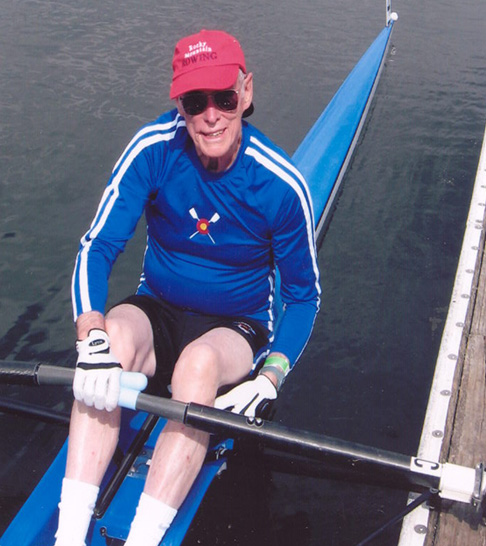 When his running career took a hit from knee problems in the early 1990s, Dean Smith ’54 switched to cycling. That added a hill climb gold medal for U.S. Masters Cycling to his array of eight national championships, gold medals, meet and world records for the 880 meters for U.S. Masters Track and Field.

A decade later, a friend introduced the 92-year-old to indoor rowing.

“I got my first experience with the rowing machine in December 2002,” Smith said, adding the world indoor championships were in Boston the following February. “So just from December to February I got myself in shape and won the world championship.”

What followed were a string of gold-medal and record-setting finishes for his age-group in events at indoor championships in this country and abroad in places like the Netherlands, England and Germany. Most recently, Smith won gold at the World Indoor Rowing Championships in Long Beach, Calif.

Raced over 2,000 meters, indoor events are held at gyms or arenas and use rowing machines that simulate rowing a watercraft. Competitions are organized by sex, age and weight class and participants range in age from 12 up to their 90s, like Smith. Rowers also can compete in internet events and challenges.

The Lone Tree, Colo., resident also has won national and international titles for outdoor rowing, traveling to locations as varied as Seattle and Tennessee to Croatia, Austria and Italy.

“(Running and rowing) both require stamina and determination but they’re about the same type of competition. The gun goes off and you race. Rowing is more of a skill, but running is, too.”

It wasn’t the first time a friend stepped in to offer him a life-changing opportunity. Smith, who raced on an Army track team while serving in the Philippines, was turned off school after an unsuccessful stint at the University of Illinois. “I wasn’t a very good student,” he said. “I failed twice and had given up on going to college.”

A high school friend was registering at Bradley and persuaded the Canton native to accompany him that day. A meeting with the dean of men led to a conversation with the track coach. “He talked me into signing up.”

“Bradley really changed my life … I didn’t study well (but) I was a hard worker,” Smith said. “And the Sigma Chi fraternity helped a lot.”

Smith’s exploits on the track led to his election to the university’s Athletics Hall of Fame in 1979.

Although an education major, Smith passed on teaching and went into sales after graduation before starting his own nutrition and wellness business. He also resumed running in his 40s to demonstrate his products’ effectiveness.

“That’s when things really started to take off,” he said. “I started winning and competing in the world class.”

Married to Priscilla for 65 years, Smith said he has tried model healthy living, never smoking or drinking. He believes discipline and perseverance allow anyone to have success.

“If you check any athlete that’s successful, they are disciplined,” he said. “Discipline is the name of the game. I liked to complete and was always looking for something to do.”