Playing by the (new) rules

From instant replay at multiple angles to enhanced training techniques, technology is constantly changing the world of sports. E-sports are now a major player with an expected audience of 427 million worldwide by 2019 and annual revenue of more than $500 million. Gamers have partnered with major pro leagues like the NBA and MLS (Major League Soccer) to create professional e-sports leagues.

But the rules haven’t kept up and there is no overall governing structure in place.

“It’s like the Wild West – it really is sort of lawless,” said Ryan Rogers, an assistant professor at Butler University and panelist on regulation and ethics at a session during the fourth annual Charley Steiner Symposium, a daylong event featuring academics, sports executives, writers, broadcasters and former players discussing an array of sports and communication issues.

“Rules are going to be important. (They) will have a profound impact on the people playing the game.”

Without oversight from a governing body like the NCAA for colleges or a players’ union or league in the pros, e-sports participants routinely practice and play long hours. They face the same competitive stresses found at the highest levels of other sports, including cheating and the use of performance-enhancing drugs. 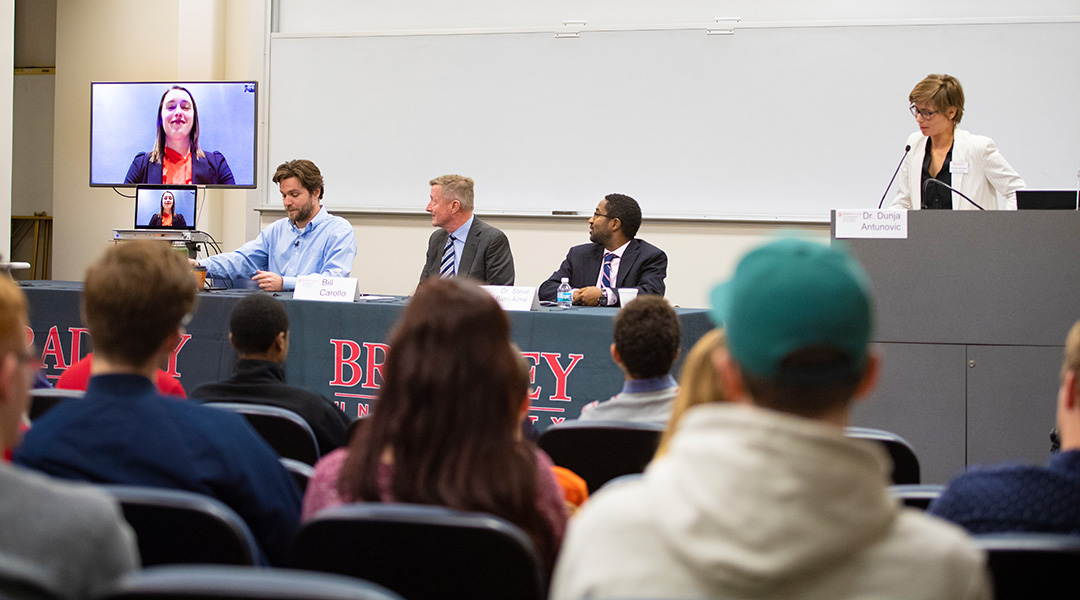 Steve Bien-Aimé, an assistant professor at the University of Alabama, noted a “contentious” relationship between women and the overall e-sports community. He said women depicted in games are highly sexualized. “That leads the e-sports community to downplay women as ‘true’ gamers,” Bien-Aimé said.

Building an infrastructure for e-sports in terms of oversight, governance and equality requires large amounts of money, he added.  “More sports are being created, and it’s replicating a structure that sports are for men.”

As with e-sports, traditional sports have to step up their game to keep pace with the times.

Lauren Niemiera ’12 M.A. ’13, is in the NBA’s referee development program. She noted recent rule changes in basketball address fans’ shortened attention spans. That was echoed by fellow panelist Bill Carollo, a longtime on-field NFL referee turned coordinator of football officials for the Collegiate Officiating Consortium. He added harnessing technology is necessary for both getting calls right and safety. “Changing the rules really changes (the structure) of the game. If player safety is not taken seriously, we won’t have (football) in 25 years.”

Niemiera and Carollo said it was vital to educate broadcasters and sportswriters about rules, revisions and their correct interpretation.

Bien-Aimé cited the disparity in taxpayer funding for pro sports facilities for men and women despite women’s gymnastics selling out the arena at a southern university while men’s basketball attendance lagged. He recalled another recent incident where facility renovations at a Division I school forced the women’s basketball team to a nearby high school while on-campus space was found for the men.

“I don’t think the rules change – the attitudes have to change,” Niemiera said, while Bien-Aimé urged journalists to stop delineating by gender and calling someone a “great female athlete.”

“You change perceptions by changing the rules around those who shape perception,” he said, encouraging future bosses in the audience to “shape the policy — make a difference.”