Tales of a young actor

It was his first day on the set of the 2011 thriller “Contagion,” and then 17-year-old Brian O’Donnell ’16 was feeling pretty intimidated. Although he had modeled and acted in commercials since the age of six, this was his first film, and he wanted to do well in front of director, Steven Soderbergh.

The scene required Matt Damon to pull O’Donnell up and point a gun in the young actor’s face.

“All I could think was, ‘Oh my god, Jason Bourne is just taking me down right now,’” said O’Donnell who played Andrew. “He picks me up from the neck and I’m airborne for a second before he throws me back against a tree.

“It was one of the greatest moments of my life.”

Although working with A-listers like Damon, Kate Winslet, Jude Law and Bryan Cranston was terrific, O’Donnell knew he would need to explore other avenues. So, he came to Bradley from Frankfort, Ill., just outside Chicago and majored in entrepreneurship with a minor in social media marketing.

Acting may not make O’Donnell rich, but it was helpful at Bradley. Memorizing lines, learning how to speak in front of people or getting a read on the people in a room were all advantageous. After graduation, he headed to Los Angeles and worked as a bartender while going out on auditions. 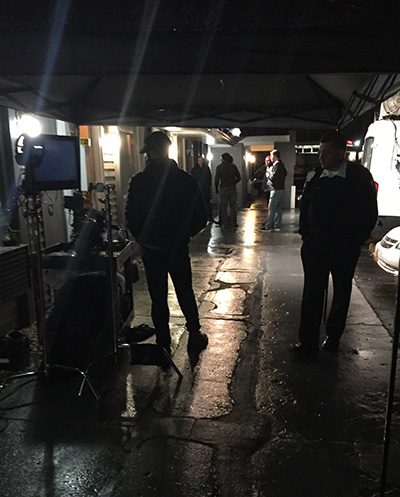 O'Donnell on the set of "Ring of Silence." At the film's premiere.

His next part wasn’t a blockbuster, but this time O’Donnell had a starring role. In the independent feature, “Ring of Silence,” he played Sean, the charming bad guy who gets his girlfriend involved in human trafficking. O’Donnell landed the part after his roommate backed out, which meant being ready immediately.

“It was a pretty big role to go from ground up in a week. There was no real framework for the character. It was a situation where the influences that we would put on a character and his story all morphed together. And it was fantastic … It was extremely liberating and freeing as an actor to be able to see where (things) take you and what you feel because you get a more natural performance that way.”

O’Donnell is back in the Windy City now taking advantage of being closer to home. He’s working on “expanding the tool kit” and exploring the production side of the business, calling it a “really exciting time in the entertainment industry.

“I (blog) here and there about movies, usually during awards time,” he said of his own foray into professional social media. “But there are a lot of different things I want to do sustain myself. I don’t want to be tied down to acting, which isn’t (always) lucrative.”

His advice to aspiring entertainers and artists?

“Start, start it right now and do as much as you possibly can. There are ever increasing amounts of media and outlets (for) whatever you make. You don’t need special equipment — Oscar-winning directors are making movies on their phones. The access is unbelievable nowadays.”