After decades playing and coaching tennis at the high school, college and recreational levels, Steve Tyler still has a passion for the game. So much, in fact, he works as an unpaid volunteer assistant for Bradley’s tennis coach — his son, Matt,

“I like being on the court, I like hitting balls, I like (practice),” said the elder Tyler. “As I’m 67, it’s a pleasure to work with 18, 19, 20, 21-year-olds. I like being on a college campus. I like being around people that are asking questions, that are inquisitive. I love playing, I love working with my son. It’s a pretty ideal situation.” 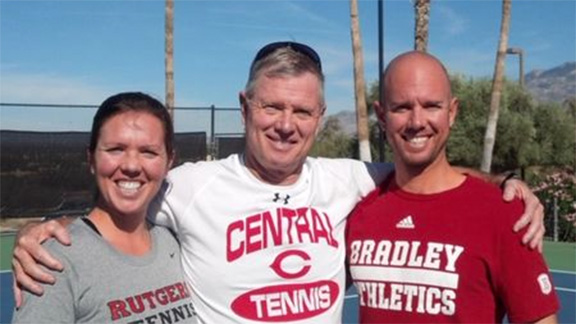 Certified a teaching professional by the U.S. Professional Tennis Association, Steve said his son could be seen as the Bradley team’s father figure, while he has a more grandfatherly role, taking a holistic approach to the team and its education.

“I think we both have a perspective on what it means to be an athlete and a coach today and what is really important — fun, fitness, camaraderie, work ethic and education,” Matt Tyler said. “I tend to take on most of the technical aspects of coaching while he is great at the mental toughness and the life skills side of things.”

The big difference between Division I tennis at Bradley and the Division III teams he coached is ability. “The ones we’re recruiting are head and shoulders above anybody at the D3 level, with the exception of one or two programs,” said Steve Tyler. “They’re faster, stronger, better players.”

He also noted foreign-born players (Bradley has two from Bolivia, two from Serbia, one each from Hungary and Canada) probably couldn’t afford a DIII school because of the lack of athletic scholarships.

The Tyler men aren’t the only coaches in the family — Steve’s daughter, Hillary, is head women’s tennis coach at Rutgers University.

“We have a very special relationship that allows us to really work well together,” the younger Tyler said. “We drive my wife and mom crazy because we tend to talk tennis and coaching way too much.”

Steve Tyler played at the University of Iowa and during a career with State Farm as an agent and manager in Colorado and Wyoming. In addition to Mesa State, he coached high school tennis while at the insurer before stepping into the full-time coaching life.

“I said, ‘Hey, I’d rather coach than continue at State Farm, so I started looking and ended up at Central College in Pella, Iowa,” where the Iowa native worked with the men’s and women’s teams for 6-1/2 years.

Tennis is only one dimension in Tyler’s life. He also has a desire to beautify his surroundings through art. Tyler’s father, a rural physician, was an accomplished woodcarver and passed along an interest in watercolor.

In addition to dozens of pieces hung throughout his house or stacked in his garage studio, Tyler’s artistic efforts adorn the front and back of the garage.

“I guess it gives me a real sensation of creating something,” he said of his art. “I like the productive feeling, seeing something tangible and knowing I went from a blank sheet of paper to something that gives people pleasure.”