THE RIGHT EXPERT AT THE RIGHT TIME

With his background studying viruses, this research scientist landed a unique opportunity to play a key role in combating the coronavirus pandemic.

In February 2020, just a few weeks into an exciting postdoctoral research position, Daniel Kneller ’12 looked at the recently-published genome sequence for a strange virus that was slowly getting media attention. He turned to his team leader and asked, “Hey, that looks familiar. Can we work on this?”

Several weeks later, the world was locked down. And Kneller was thrust right into the middle of the coronavirus pandemic in a very unique position.

Currently a research scientist at New England Biolabs, Kneller has brought this transformational experience and his research prowess to focus on advancing mRNA technology — the root of the most successful COVID-19 vaccines — to make the technology more efficient and cost effective to produce. 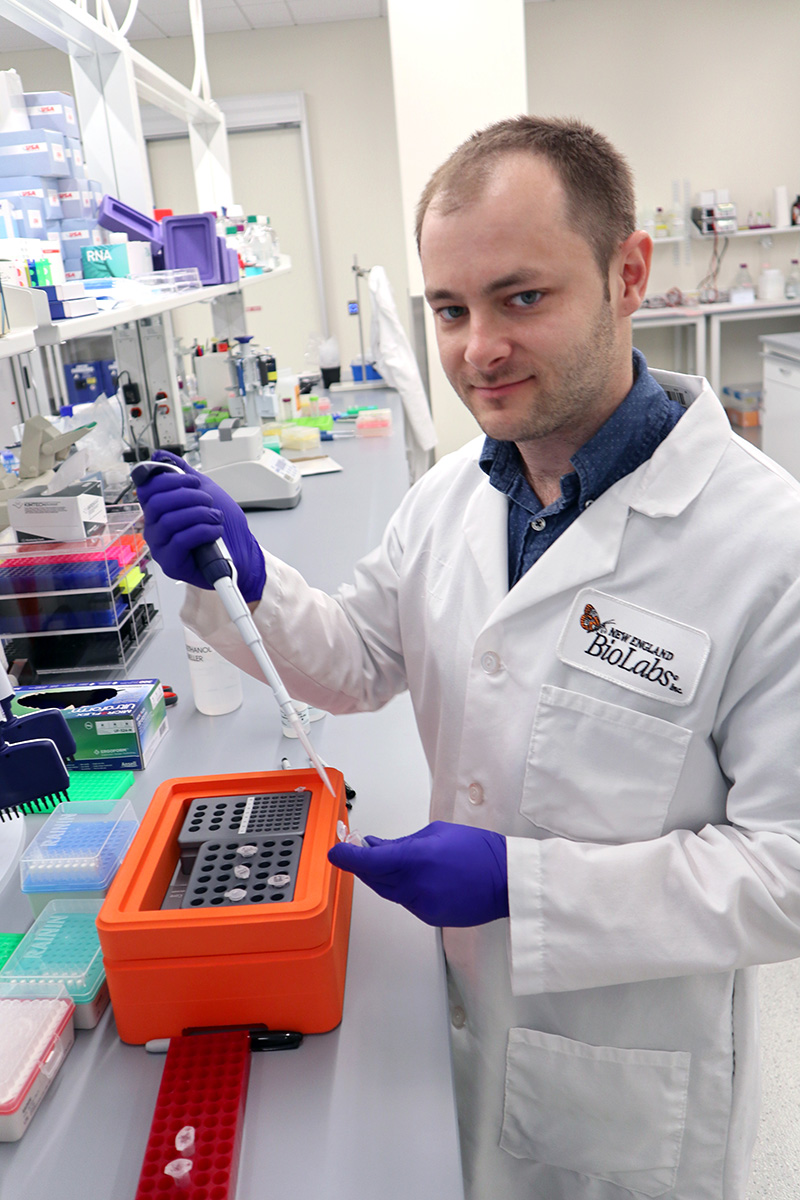 At New England Biolabs, Kneller focuses on developing mRNA therapeutics: “We can bring this new technology to people that’s more effective and cheaper to produce at scale.”

“I am afforded the ability to do my research unencumbered by limited financial resources. It’s amazing, because it’s every scientist’s dream to study an interesting problem with the resources to do so.”

Growing up in suburban Chicago, Kneller admitted to having an insatiable curiosity. Sparked by his high school AP biology class, he realized this was a career in which he could thrive.

“You get to ask questions, and answer them, and solve problems, and you get to do it in an avenue that can potentially help humanity and mankind,” he said.

With the goal of becoming a research scientist, Kneller chose Bradley University because of the opportunity to conduct undergraduate research. Associate Professor of Biology Naomi Stover worked closely with him during his undergraduate studies, and became a mentor to Kneller as he evolved from a driven student to a collaborating colleague.

Stover also encouraged Kneller to explore a change of perspective for grad school, which led him to Georgia State University. He focused his research on HIV and how to treat drug resistance and earned a doctorate in the process.

“There’s only so much that you can learn without putting yourself out of your comfort zone,” said Kneller on his decision to relocate out of the Midwest for the first time.

He also continued his passion for powerlifting. Kneller had found the sport to be a powerful means to de-stress during his Bradley days. He organized Georgia State’s first powerlifting team and helped mentor novice and experienced powerlifters alike.

“You spend all your days talking to eggheads, then you go to the gym and you talk to the meatheads. And it was great. They were very diverse conversations you could have.”

Now back to his workout regiment, Kneller admitted one of the biggest challenges he faced during the pandemic were the gym closures.

After the stint in Atlanta, Kneller joined the U.S. government-funded Oak Ridge National Laboratory (ORNL) in January 2020 to continue his post-doctoral research into HIV. However, within weeks of his start, Kneller was recruited into the scientist army as his focus shifted immediately to the unfolding global crisis.

“I was exasperated,” he said after walking into the lab on the first day of lockdown when the gravity of the situation hit him. “(I thought) It’s more than just an interesting science problem for me now, this is a real problem that could hurt us.”

Collaborating with scientists all over the world, with the full resources of ORNL behind them, Kneller and his colleagues advanced research on how to target the SARS-CoV-2 virus at an unprecedented rate. During his two years on the project, he was the lead author on 10 pivotal peer-reviewed papers that opened numerous doors for innovative treatment options against COVID-19.

“The problem is this kind of technique is so uncertain, no one would ever conceivably promise that you can do it successfully, let alone do it in less than two years’ time.