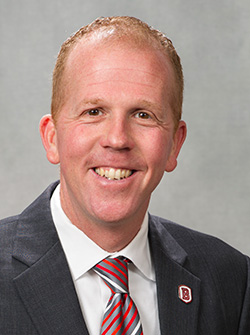 Nathan Thomas has been at Bradley since 2000, having served as the Executive Director of Residential Living and Leadership since 2004 and prior to that was the Director of Greek Life. As the chief student affairs officer he is responsible for the educational experience of Bradley students outside the classroom.

Mr. Thomas is a past recipient of the Francis C. Mergen Award for Public Service and InterBusiness Issues 40 Under 40. He serves on the Allocations Committee for the Heart of Illinois United Way, the Redbrand Credit Union, the Editorial Board for the Association of Fraternity Advisors Perspectives and is a USTA and ITA tennis official. Previously Mr. Thomas worked at the Phi Delta Theta General Headquarters.

Mr. Thomas received a B.S. from Southeast Missouri State University and an M.B.A. from Eastern Illinois University. He and his wife, Erin, have two children, Lucas and Piper.