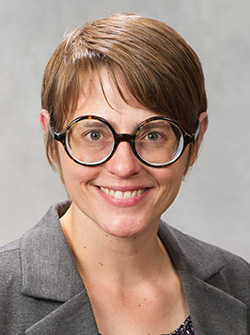 Libby Tronnes joined Bradley University in 2017. She spent four years in the Department of History before becoming Head of Special Collections in the Cullom-Davis Library. Her academic journey toward becoming a historian began at the University of Wisconsin-Whitewater. As a senior in college, Libby had to write a thesis. She found her topic in the trash can of a retiring history professor. Her research didn’t end there, however. The discarded treasure of newspaper clippings about an armed takeover in 1975 by a group of Menominee activists drew her down a rabbit hole where Libby discovered that doing the work of a historian was fun and meaningful. More journeys full of research, writing, and teaching followed at the University of Wisconsin-Madison. Now Dr. Tronnes calls this place home. Hailing from southern Wisconsin’s Rock River Valley, the ancestral home of the Ho-Chunk, she now lives and works as a settler scholar and educator in the ancestral homelands of the Peoria and other Indigenous communities. Libby continues to introduce Bradley students to the fun, rigorous, and important work that researchers do and looks forward to nudging more of them down their own rabbit holes.

If you’re interested in seeing some of the rare books and manuscripts as well as other materials we store in the “vault” please come see Dr. Tronnes on the third floor of the Cullom-Davis library!

Dr. Tronnes researches and writes about North American Indigenous history with focus on the western Great Lakes. Libby’s current book project focuses on the 1832 Black Hawk War and the central role of the Rock River Ho-Chunk in shaping that crisis, namely their attempts to keep the peace and protect their corn crop. Libby’s work also examines Ho-Chunk resistance to forced removals in the nineteenth century as well as their returns to Illinois and Wisconsin homelands. Broadly speaking, Libby’s work covers the Midwest, American West, and Borderlands with emphasis on Native survivance amidst settler colonialism and its inherent violence and its ongoing contests over place, Indigeneity, historical meaning, and belonging.