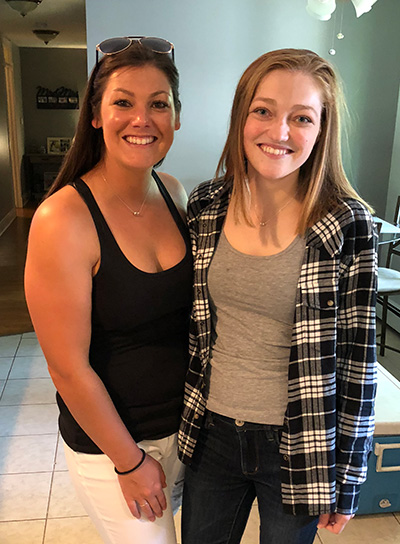 Skrobin had just donated a kidney to her younger cousin.

In the fall of 2017, Moore, a junior at Purdue University, experienced blurry vision that was so alarming she headed for the emergency room. With sky-high blood pressure, she was admitted to the ICU and stayed a week, enduring test after test. The shocking verdict: due to a rare chronic disease called atypical hemolytic uremic syndrome, the 20-year-old was in kidney failure and needed a transplant.

When none of Moore’s immediate family members were a match, a throng of friends and family, including Skrobin, volunteered to be tested. Already signed up with the Illinois Organ/Tissue Donor Registry, the elementary school teacher jumped at the chance to help her cousin.

“Natalie’s a 20-year-old girl, pre-med at Purdue, going through kidney failure. I knew she might have to wait five or six years for a kidney, and would have to go on dialysis in the meantime. A live organ donation offered the best chance for her.”

The matching process involved a full day of education and testing at Northwestern. After several weeks, Skrobin was deemed the best match. “When I got the call letting me know, I looked at my teaching and coaching schedules, then called Natalie. I said, ‘What are you doing over spring break? Is it a good time to get a kidney?’” Skrobin recalled.

Skrobin, who’s in her eighth year of teaching — her fifth at Lane Elementary in Alsip, Ill. — was careful what she told her students before the transplant.

“Before spring break, I told them I’d be out for a week after break. I didn’t want to worry them (with specifics). When I returned, we did talk about the transplant. I had some weight (lifting) restrictions, and they were very understanding.”

She is encouraging about live donation, stressing that medical teams cared about both patients. “If you’re interested, get educated. You could save someone’s life. It’s a great feeling to see Natalie healthy and succeeding, and I was back to normal after 12 weeks.”

Skrobin’s resilience and generosity made an impact years ago on Amy Hayes, who arrived as Bradley’s head softball coach during Skrobin’s senior year. “Katy hurt her knee during the season,” she said, “But she had the best attitude. She was dynamic, she worked really hard. She was the best teammate.”

Hayes keeps up with Skrobin via social media. That’s how she knew she was teaching grade school and coaching softball at Oak Forest High School — and about the kidney donation. “It really didn’t surprise me,” she said. “She’s a super-giving person. Always there for her family and friends. “People want to talk to her, to be around her.

Moore agrees. “I always thought she was so cool. I chose her for my confirmation sponsor,” said Moore. “Katy deserves to be famous.”