Imagine choosing a graduate school from thousands of miles away, knowing little about it beyond information gleaned through social media and the internet.

Then, once you arrive, you find your undergraduate degree won’t work for your intended course of study and you have to choose a different option while navigating a different culture and competing in athletics for your new college.

“To this day, it’s the weirdest thing,” Niamh Markham M.A. ’19 said of her choice of Bradley. “It was a gut feeling. I never (visited) here, never viewed the campus. I just had a feeling.”

Markham, whose first name is pronounced Neev, had completed her undergrad degree as a teacher at Dublin City University in her native Ireland. But her credentials to teach ages 5–12 weren’t acceptable for graduate study in education here. So she switched to the master’s program in non-profit leadership, figuring if things didn’t work out at Bradley she could always return home and teach. 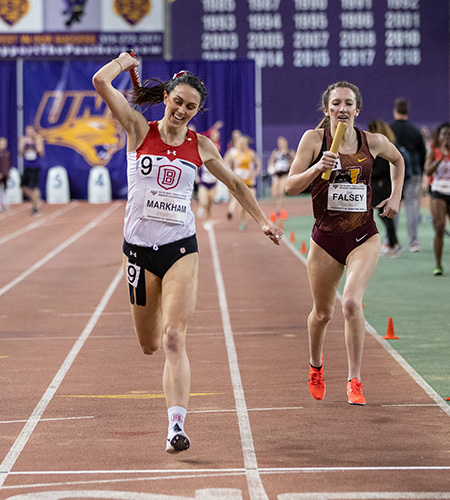 Having run meets as an undergrad and represented Ireland in 18-under international events, Markham was accustomed to a different style of competition because Irish collegiate sports are run more on the club level.

“It was an adjustment (here) to realize ‘Oh, I came in 20th in that race but yet I’m running faster,” Markham said. “It developed me and brought me on a lot time-wise, racing-wise.”

Active in basketball, soccer and Gaelic football as a youngster, Markham focused on track and cross country as a teen. The self-described “adrenaline junkie” sees it as a unique blend of individualism with a dash of teamwork.

“At the end of the day, it’s you on your own. When you cross the finish line, if you’ve done well, it’s on you. If you’ve done bad, it’s on you. But if someone is having a bad day, you know you have to pull up your socks and help out.”

Last cross country season, Markham scored for Bradley in three of the four meets she ran. She was third on the team at the NCAA Midwest Regional and finished 28th at the Missouri Valley Conference Championship.

Heading overseas was easier with a degree already in hand and in her 20s, Markham said. She also noted that resources — academic and athletic – are greater for students here. While unplanned, her switch to studying non-profit leadership while working to get her Irish teaching certification accepted in Illinois has been valuable. 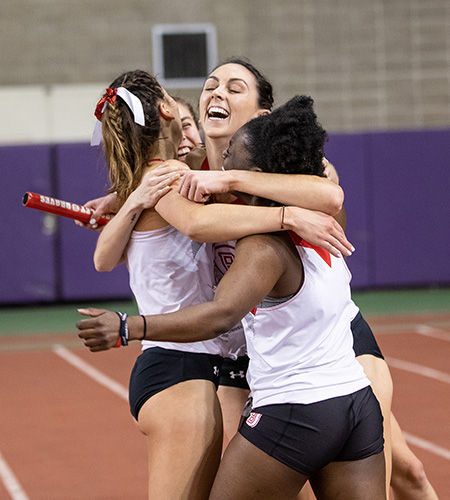 A celebration for a well-deserved win.

“It’s really opened my eyes. I know my focus is on helping children … I realize there’s more opportunity than being in a classroom for the next 40 years.”

Future plans could include an OPT (Optional Practical Training) visa allowing her to work for a year getting practical experience to complement her education.

“In my head, I still have a backup plan,” Markham said. “So far, I’ve been lucky and everything has worked out. Maybe I’ll keep jumping until something goes wrong.”