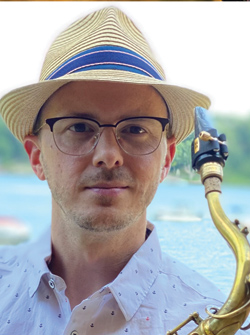 Since the age of nineteen, Daniel Burke has kept a dynamic performance schedule within the Chicagoland and greater Central Illinois area. His distinctive musical approach has awarded him the experience to perform with some of the country’s foremost musical acts including the Clark Terry Big Band, Jason Marsalis, the Heritage Jazz Orchestra, the Heisenberg Uncertainty Players, the Temptations, rock band Fort Frances, blues band Mississippi Heat, and jazz-metal fusion band Conflux. As a leader or sideman, Burke has performed at many of Illinois’ preeminent music venues including The Green Mill, The Jazz Showcase, Andy’s Jazz Club, Winter’s Jazz Club, Aracada Theatre, McAninch Arts Center, Bloomington Center for the Performing Arts, and has headlined the Chicago Blues Festival at the Pritzker Pavilion in Millennium Park. Burke also leads his own ensembles and has recorded Silhouettes in the Glass Sky (2016), a jazz quintet album featuring eight of his original compositions together with the playing of some of Chicago’s top talent.

In addition to his demanding performance schedule, Burke maintains a thriving private lesson studio. Burke is also a sought after clinician, giving masterclasses on both classical and jazz saxophone as well as coaching various large and small jazz and classical ensembles. Daniel Burke holds a B.M. in Saxophone Performance with an Emphasis in Jazz Studies from Northern Illinois University and a M.M. with distinction in Jazz Studies from DePaul University.