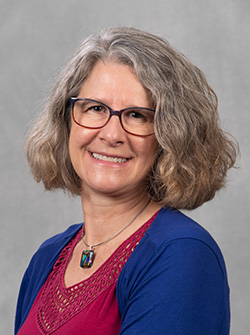 Jeanie Bukowski holds a B.A. in international studies from Bradley University. Following a private sector experience that included an association with Caterpillar, she completed her Ph.D. in political science, with concentrations in international relations and comparative politics, from the University of Illinois at Urbana-Champaign. She is an associate professor in the Institute of International Studies at Bradley University. Her areas of expertise include international organizations, integration, the European Union, Southern Europe, and environmental politics and policy, particularly transboundary water issues. She received Bradley’s New Faculty Achievement Award for Teaching in 2001, and is a two-time Fulbright research grant recipient, in 1993/94 and 2007. She is a faculty affiliate with the European Union Center and the Program for Arms Control, Disarmament, and International Security, both at the University of Illinois.

Professor Bukowski teaches the Institute’s two core introductory courses, IS 103 and 104, which are designed to give students a solid fundamental knowledge of the characteristics, principles, and issues that characterize the field of international studies. She also teaches the required Normative Theories of International Studies course, in which students have the opportunity to develop their own personal philosophy on the international system in a “Relevant Utopia,” and the European Integration course, which involves a student simulation of a European Council summit meeting. She has taught an honors class on Global Climate Change and participated with colleagues in the physical sciences in team-teaching graduate courses on climate change and the human perspective of water resources.

Dr. Bukowski has co-edited two books on Europeanization and the re-distribution of political authority, and has published articles on regional development policy in Spain, policy networks, and environmental policy. She has carried out extensive fieldwork in Spain and Portugal, on both regional economic development and shared resource issues. Her current research uses various theoretical perspectives to analyze transboundary water cooperation on the Iberian Peninsula. She received a Fulbright Senior Scholar grant in 2007 to study this issue, and she presented a paper on the subject at the VII Iberian Congress on the Management and Planning of Water in Talavera de la Reina, Spain, in February 2011. Her publications include:  “Sharing Water on the Iberian Peninsula: A Europeanization Approach to Explaining Transboundary Cooperation,” New Water Culture Foundation, Conference Proceedings, VII Iberian Congress on the Management and Planning of Water (15-20 February, 2010); “Spanish Water Policy and the National Hydrological Plan: An Advocacy Coalition Approach to Policy Change,” South European Society and Politics, Vol. 12, No. 1 (March 2007); “Multi-level Networks as a Threat to Democracy? The Case of Portugal’s Vasco da Gama Bridge,” Journal of Southern Europe and the Balkans, Vol. 6, No. 3 (December 2004).

Professor Bukowski was selected to serve on the Fulbright National Screening Committee for grant proposals to Spain and Portugal in 2010. She participated as an expert on Spain in a conference organized for U.S. Department of State and intelligence community officials in 2009, and in a State Department briefing of the designated US ambassador to Spain in 2005. She is currently a member of the University Sabbatical Leave Committee, the Women’s Studies Committee, and the West European Area Studies Minor Coordinating Committee. She serves as faculty advisor for the International Affairs Organization and is a member of the Peoria Area World Affairs Council. She was a past secretary for the American Association of University Professors-Bradley University Chapter.